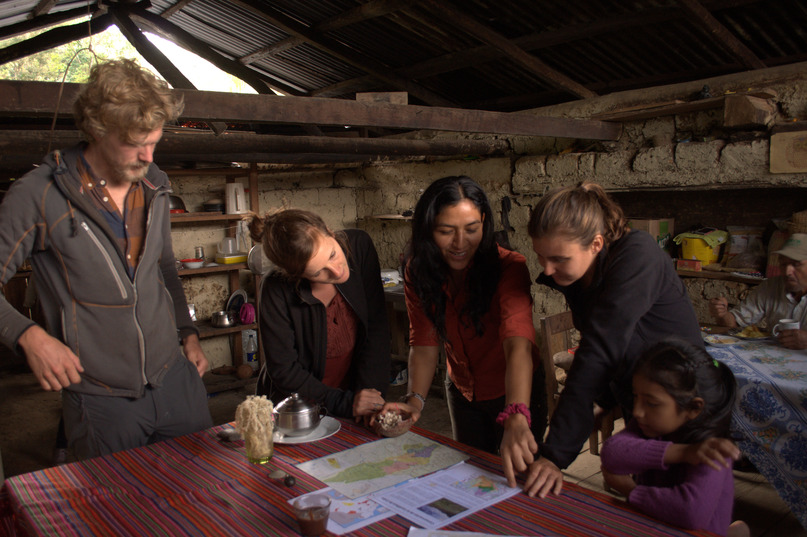 ITTO Fellow Talia Lostaunau-García (standing, on the right) conducts an interview on ecotourism in the Peruvian Amazon. Photo: D. Zimmermann

Peruvian national Talia Lostaunau-García has written about her journey to the Tambopata National Reserve in the Amazon in pursuit of “solutions journalism”, using skills gained through an ITTO Fellowship.

Talia obtained a university degree in forest engineering in 2014, with the aim of contributing to the conservation of tropical forests in her home country. In 2015, she started 2enRuta, a nature and ecotourism video blog, where she found her true passion, reporting on the conservation of Peru’s ecosystems. She completed a certificate in journalism at the University of California, Berkeley, United States of America, thanks to an ITTO Fellowship, equipping her with the knowledge, tools and confidence to report on sustainable development initiatives in the Amazon. Now working as a freelance journalist, Talia’s work has been published in online magazines such as Rumbos del Peru and Touring, and one of her articles will soon be published in Mongabay Latam.

Talia practises solutions journalism, which is evidence-based reporting on environmental issues to explain how and why responses are working—or not. As part of her work, she has embarked on research into conservation initiatives in the Tambopata National Reserve. She wants to show, through solutions journalism, how science and ecotourism can work together to conserve the Amazon forest. For an upcoming article, she writes:

“I have left very early morning from Lima to the forest town of Puerto Maldonado, capital of the department of Madre de Dios. Dozing on and off during the flight, I have been dreaming about my final destination: the Tambopata National Reserve. I can see alligators, monkeys, frogs and even a jaguar. I open my eyes and look out the window of the plane. I see the dense Amazon forest, a chocolate-coloured meandering river and the cochas (lakes) that are formed by the shifts in its course. The forest is gradually becoming less dense and the reddish soil covered by pools of standing water indicates to me that something is not right. Illegal gold mining has colonized the territory. Between 2017 and 2018, this activity destroyed more than 18 000 hectares of forest lands, the equivalent of 25 000 football fields.

“This devastating reality occurs in the buffer zone of the Tambopata National Reserve, one of the reserves with the highest rates of biodiversity on the planet. Despite the seriousness of the problem, the good work being done by Peru’s National Natural Protected Areas Service, as well as other state institutions, NGOs, and private companies, has managed to control the expansion of mining within the Reserve. In addition, in February 2019, the Peruvian government began a mega operation known as “Operación Mercurio” (Mercury Operation) to eradicate illegal gold mining in the area. The results were excellent: mining-related deforestation decreased by 92% between 2018 (900 hectares from February to June) and 2019 (66.7 hectares in the corresponding period).

“Today, the Tambopata National Reserve is a paradise for ecotourism lovers. More than 45 000 people from different parts of Peru and from all over the world visit it every year to connect with nature. There are several local businesses and communities that benefit from this sustainable activity carried out within the reserve and in its buffer zone, thus becoming their major advocates. This 274 690-hectare area is home to more than 600 bird species, 1200 species of butterflies, 100 amphibians, 180 fish species, 169 mammals and 103 reptiles. It is expected that tourism will continue to grow on a sustainable basis in this and other natural protected areas of the Peruvian Amazon, providing local communities with an environmentally friendly economic alternative.”

One of Talia’s future projects is to report on to the “Macaw project”, a long-term multidisciplinary study on the natural history, conservation, ecotourism and management of large macaws and parrots. Macaws are considered flagship species that served as a reference for the conservation of the ecosystems where they live, such as the Tambopata National Reserve.

As Talia’s work shows, the ITTO Fellowship Programme is helping develop the careers and skillsets of young forestry professionals. About 1400 people have benefited from ITTO Fellowships to date, and the programme is therefore making an important contribution to strengthening expertise in tropical forestry worldwide.