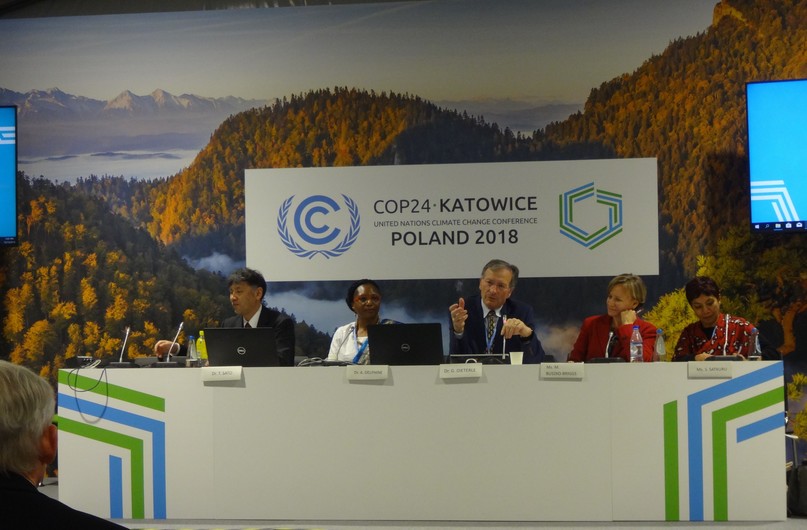 Tropical forest degradation is responsible for more carbon losses than deforestation, and investing in restoration through landscape approaches linked to supply chains is essential, therefore, for limiting the global temperature increase to 1.5 ˚C, according to a side-event organized by ITTO and the Japan Forestry and Forest Products Research Institute at the global climate conference last week.

ITTO Executive Director Dr Dieterle told participants that a recent study published in Science indicated that tropical forests are net carbon emitters due to degradation, which accounts for an estimated 69% of carbon density losses in tropical forests. Under business-as-usual scenarios, the projected continued increase in the global population will result in further deforestation and forest degradation and increase the use of non-environmentally friendly materials, which would make it almost impossible to achieve the climate target under the Paris Agreement.

On the other hand, massive investment in forest landscape restoration linked to sustainable supply chains for timber and other forest products offered a viable, relatively inexpensive solution, said Dr Dieterle.

“Such investment would bring multiple wins for the Sustainable Development Goals, including rural jobs, poverty reduction, improved resilience of local communities, wood security, and the conservation of remaining primary forests and the biodiversity contained in them,” he said.

“Most importantly, forest investment would enable the massive storage of carbon through restoration, reforestation, afforestation, sustainable forest management and the substitution of energy-intensive materials such as concrete or steel with sustainably produced wood.”

Such activities could save up to 8 gigatonnes of carbon dioxide emissions per year, equivalent to 15% of the mitigation gap in 2018, according to Dr Dieterle.

“The key to achieving such an enabling environment is looking at landscape restoration from the perspective of entire supply chains,” he said.

Mr Koji Hongo, Deputy Director General of Japan’s Forestry Agency, who also spoke at the side-event, said that the restoration of degraded tropical forest landscapes offers opportunities to reconcile many interests and goals, such as livelihoods, carbon storage and biodiversity conservation and increasing the resilience of ecosystems and people.  Mr Hongo focused on the importance of maintaining or enhancing carbon stocks in tropical forests under the UN Strategic Plan for Forests 2017–2030 and how doing so could contribute to achieving several of the Sustainable Development Goals.

Mr Tamotsu Sato, Director of the Department of Forest Vegetation at the Japan Forestry and Forest Products Research Institute, presented on innovative scientific methods for evaluating forest degradation, including the impact of fire on forest quality and species composition. Mr Sato also spoke about the potential role of satellite-borne lidar and unmanned aerial vehicles in evaluating forest degradation at various spatial scales.

Malgorzata Buszko-Briggs presented on the efforts of the Food and Agriculture Organization of the United Nations (FAO) in forestry and landscape restoration. She referred to the Special Report of the Intergovernmental Panel on Climate Change, which pays special attention to reforestation, the outcome of the recent Conference of the Parties to the Convention on Biological Diversity, which highlighted the importance of cross-sectoral work for mainstreaming biodiversity, and cooperation on restoration, including with ITTO.

Finally, Delphine Ahoussi, President of the MALEBI Women’s Association in Côte d’Ivoire, spoke on one of ITTO’s successful projects that has turned forest restoration by women into a profitable business venture. Mme Ahoussi explained how women in her association, which focuses on the production of wood charcoal, realized that, without restoration and reforestation, they would lose their forest, which was their primary source of raw materials. MALEBI turned to ITTO for technical and financial support to restore 100 hectares of the Ahua gazetted forest using teak and acacia trees, inter-planted with cassava (a cash crop that provides the women with immediate income). Now, the members of the MALEBI women’s association have a stable source of income and a secure supply of timber for charcoal production. The project, said Mme Ahoussi, has changed perceptions of women empowerment in the management of natural resources in her country.

Responding to a question from the audience on whether ITTO would establish its own verification or certification scheme for the supply-chains initiative in which it is involved, Dr Dieterle said that companies already had access to several operational verification and certification schemes. ITTO’s involvement in the initiative would help in adding expertise, credibility and transparency.

Answers to other questions drew out the views of panelists on the range of perceptions among stakeholders on what constitutes forest landscape restoration; suitable plantation species that could be promoted as part of this effort, depending on the needs of the country; the role of monocultures; and taking into consideration the need for woodfuel and minimizing the impacts of deforestation and land degradation.

Participants in the side-event agreed that forest restoration can build bridges between climate mitigation and adaptation, biodiversity and local livelihoods.