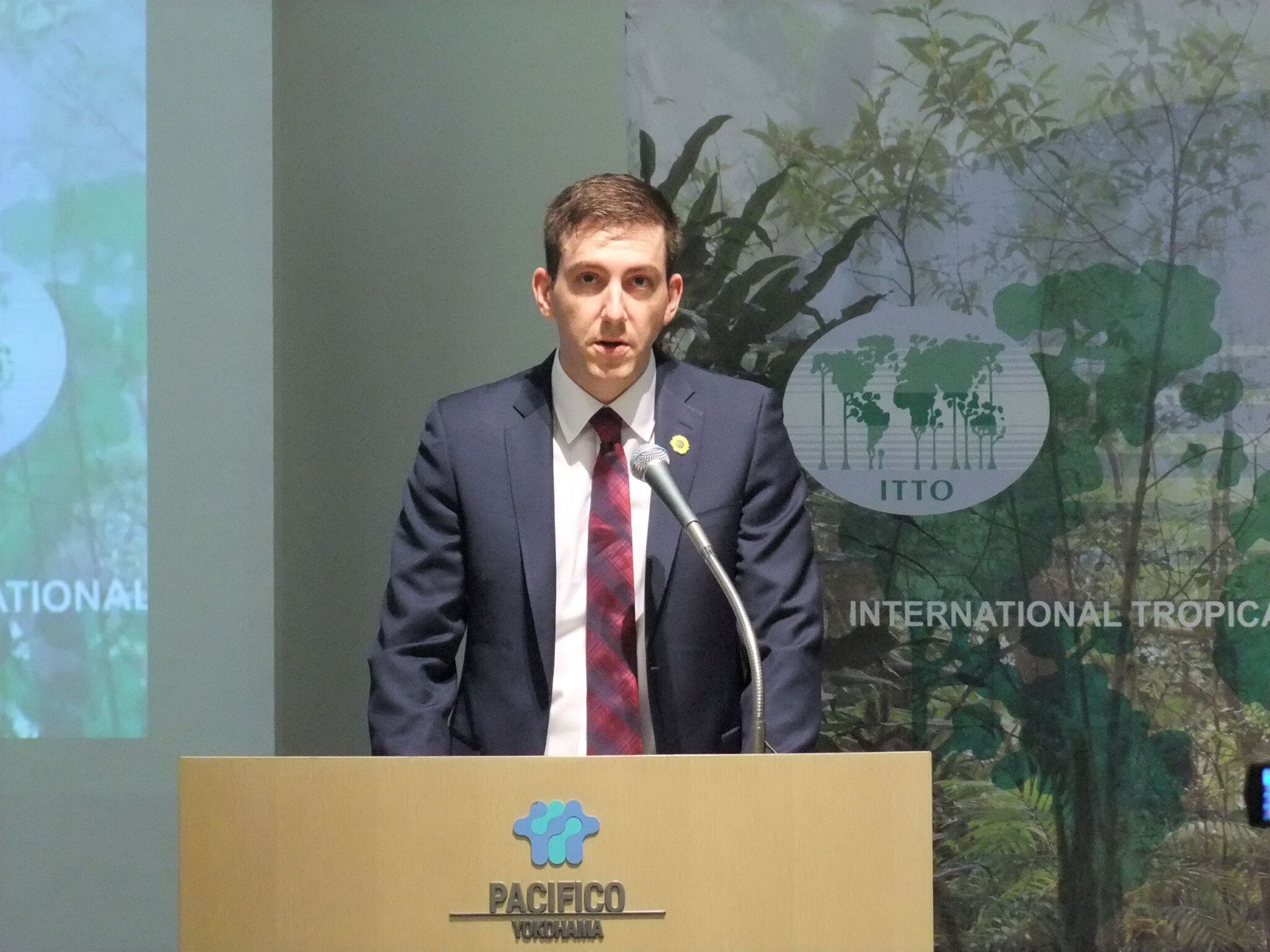 Yokohama, Japan, 7 November 2022: To deliver continued success, ITTO members should honour their commitments under the agreement governing the Organization, said Chair of the International Tropical Timber Council Jesse Mahoney at the opening of the Council’s 58th session today.

The session, which is a hybrid event featuring attendance both in person and online, represents an opportunity to shape the future of ITTO and consolidate its place as a multilateral tropical forestry forum, said Mr Mahoney.

“We are all in recovery from a pandemic that tested us and uncovered shortcomings in many of our systems spanning people and labour, supply chains and market resilience, all issues in the mandate of the Organization,” he said.

“But to deliver continued success, we, the Council, must also uphold our commitments as parties to the ITTA [International Tropical Timber Agreement].”

Mr Mahoney said this will require partnership and complementarity across the system.

“We are here to re-affirm our support for the sustainable management and conservation of tropical forests as well as the expansion and diversification of international trade in tropical timber from sustainably managed and legally harvested forests,” he said.

“To this end we must work together, in the spirit of cooperation, of compromise, and of advancement toward our common mission.”

He spoke of the legal and sustainable tropical timber trade as a “great tool” for reducing greenhouse-gas emissions and thereby contributing to the mitigation of climate change.

“Unlike materials such as concrete and steel, tropical timber can be expected to sequester carbon through its use as a construction material and reduce the energy consumed in storing, manufacturing and finishing,” he said. “As such, timber is a vital material, one that holds the key to advancing toward the goal of zero carbon.”

Dr YamanakaTakeharu, Mayor of Yokohama, ITTO’s host city, spoke of the actions Yokohama City is taking, to reduce the city’s greenhouse-gas emissions by 50% by 2030 (compared with 2013 emissions). These include promoting the use of wood in construction in both public and private buildings.

“As a member of the global community, Yokohama is committed to contributing to the achievement of the SDGs [Sustainable Development Goals], together with ITTO, other international organizations and cities around the world,” he said.

His Excellency Roberto Seminario Portocarrero, Peru’s Ambassador to Japan, said that, over its lifetime, ITTO has made valuable contributions to strengthening the sustainable management of Peru’s tropical forests. Mr Seminario also noted the important role ITTO has played globally in aspects as diverse as resource-use efficiency, market information and transparency, tropical timber supply chains, biodiversity conservation and the livelihoods of forest-dependent communities.

“For this reason, ITTO needs to continue supporting the financing of projects and providing advice on the preparation of proposals that prioritize sustainable forest management and legal and sustainable supply chains,” he said. Mr Seminario noted that Peru had submitted several project proposals and concept notes to ITTO that were awaiting financing.

ITTO Executive Director Ms Sheam Satkuru began her opening remarks by expressing her gratitude to the Government of Japan and the City of Yokohama for their continued hosting of Council sessions in Yokohama. She further stated that the international community is increasingly recognizing the essential role of tropical forests in climate-change mitigation and adaptation. She said the Secretariat has focused on ensuring that the voices of the ITTO membership are heard and the Organization’s positions known on the important role of legal and sustainable tropical timber trade in ensuring the sustainability of tropical forests. At the same time, however, the amount of voluntary contributions to the work of the Organization is low.

“If members want the Organization to be effective, there must be some financial commitment from the membership to take it forward,” she said.

Funding is also important for its work with international partners.

“ITTO is still highly respected in the international community on the basis of its technical expertise and experience but the lack of funding is hindering the Organization’s capacity to form productive partnerships,” said Ms Satkuru.

Ms Satkuru announced that Angola had recently acceded to the ITTA, bringing the membership of ITTO to 75 (37 producers and 38 consumers).

During the opening session, the Council was treated to a performance by a flute quartet from the College of Music at Ferris University Yokohama, including a rendition of “Under the Sea” (composed by Alan Menken).

In the afternoon plenary, the Council completed agenda items 1, 3, 4, 5, 6, 7, 8 and 10. The Secretariat reported that a quorum (agenda item 2) had not yet been achieved, at least in part because of the hybrid nature of the session (and time differences applicable to some virtual attendees). This agenda item will be revisited during the session. The Council also discussed agenda items 11 and 12, both of which will be reopened later in the week.

Tomorrow (Tuesday 8 November 2022) will feature a Joint Committee Session, including the Annual Market Discussion on the theme, “Carbon Trade and Tropical Forests”. The joint session will also examine items such as an update on the Independent Market Monitor, an event convened by the Civil Society Advisory Group on a community-based project in Togo, and reports on project evaluations. There will also be sessions of the Committee on Reforestation and Forest Management and CEM-CFI. The Annual Market Discussion, which is scheduled to start at 14:30 Japan Standard Time, will be streamed on YouTube at this link. 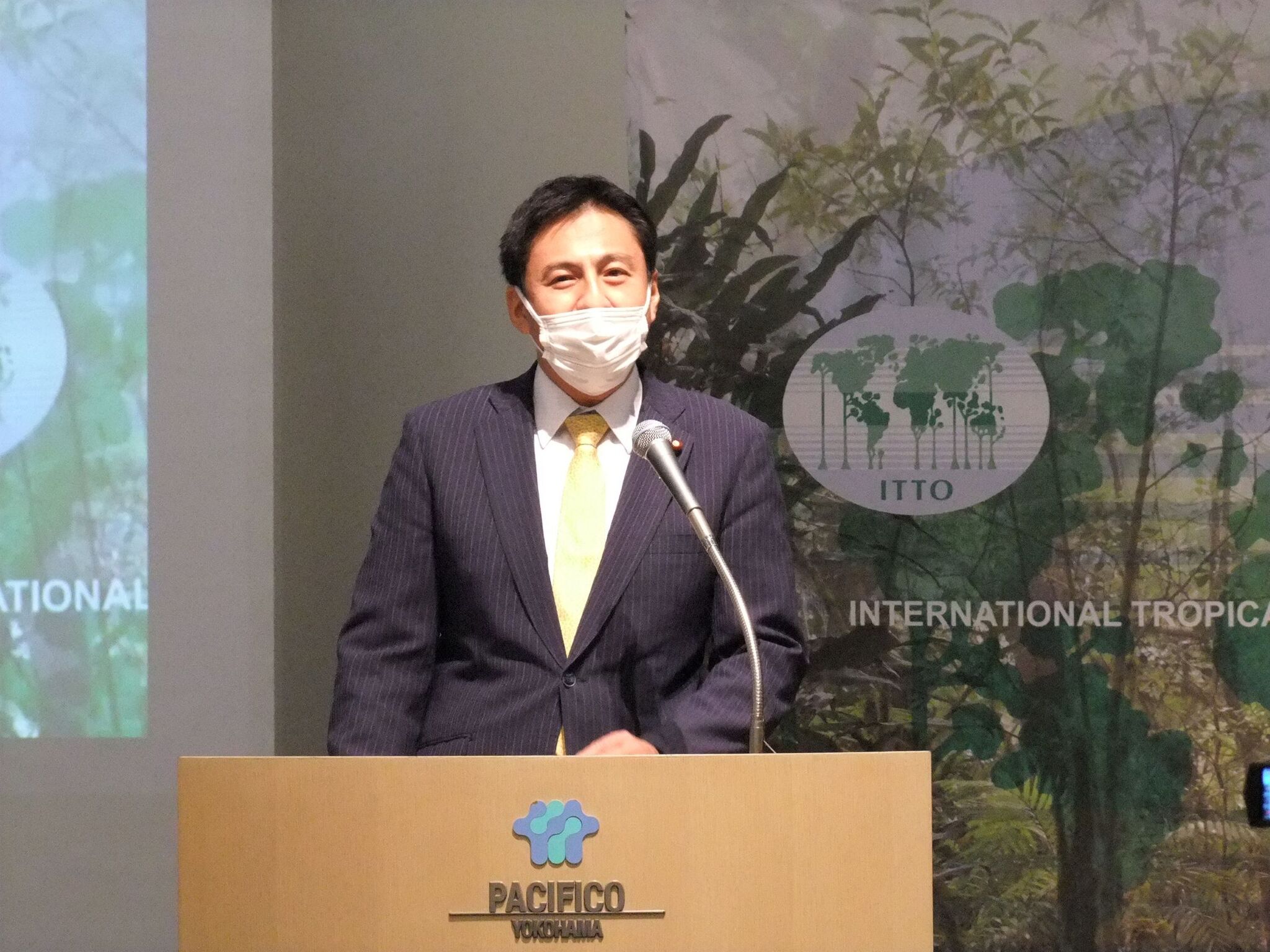 Japan’s Minister of State, Takei Shunsuke, speaks at the opening of the 58th Session of the International Tropical Timber Council. Photo: Y. Kamijo/ITTO

Dr Yamanaka Takeharu, Mayor of Yokohama, speaks at the opening of the 58th Session of the International Tropical Timber Council. Photo: Y. Kamijo/ITTO 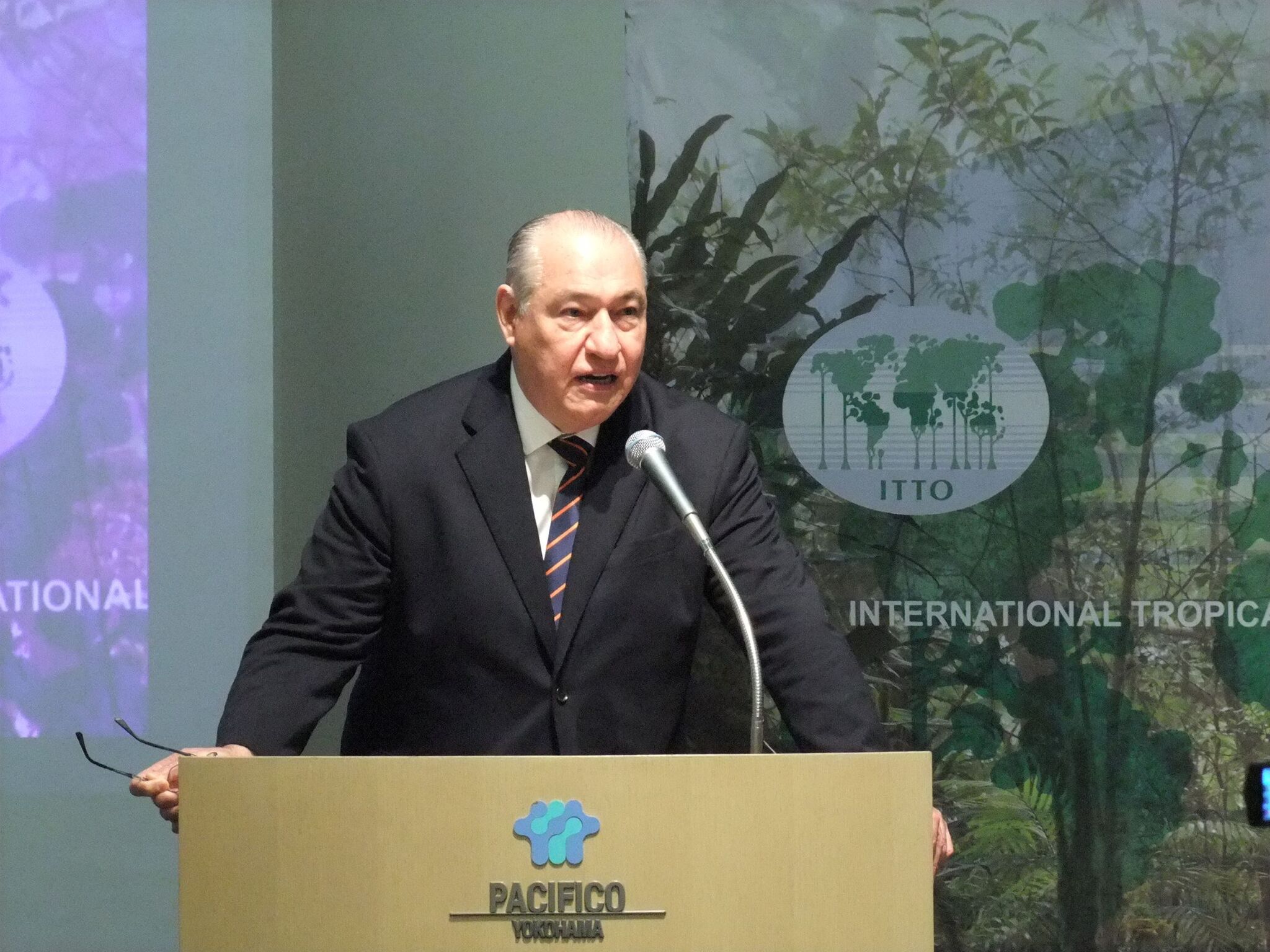 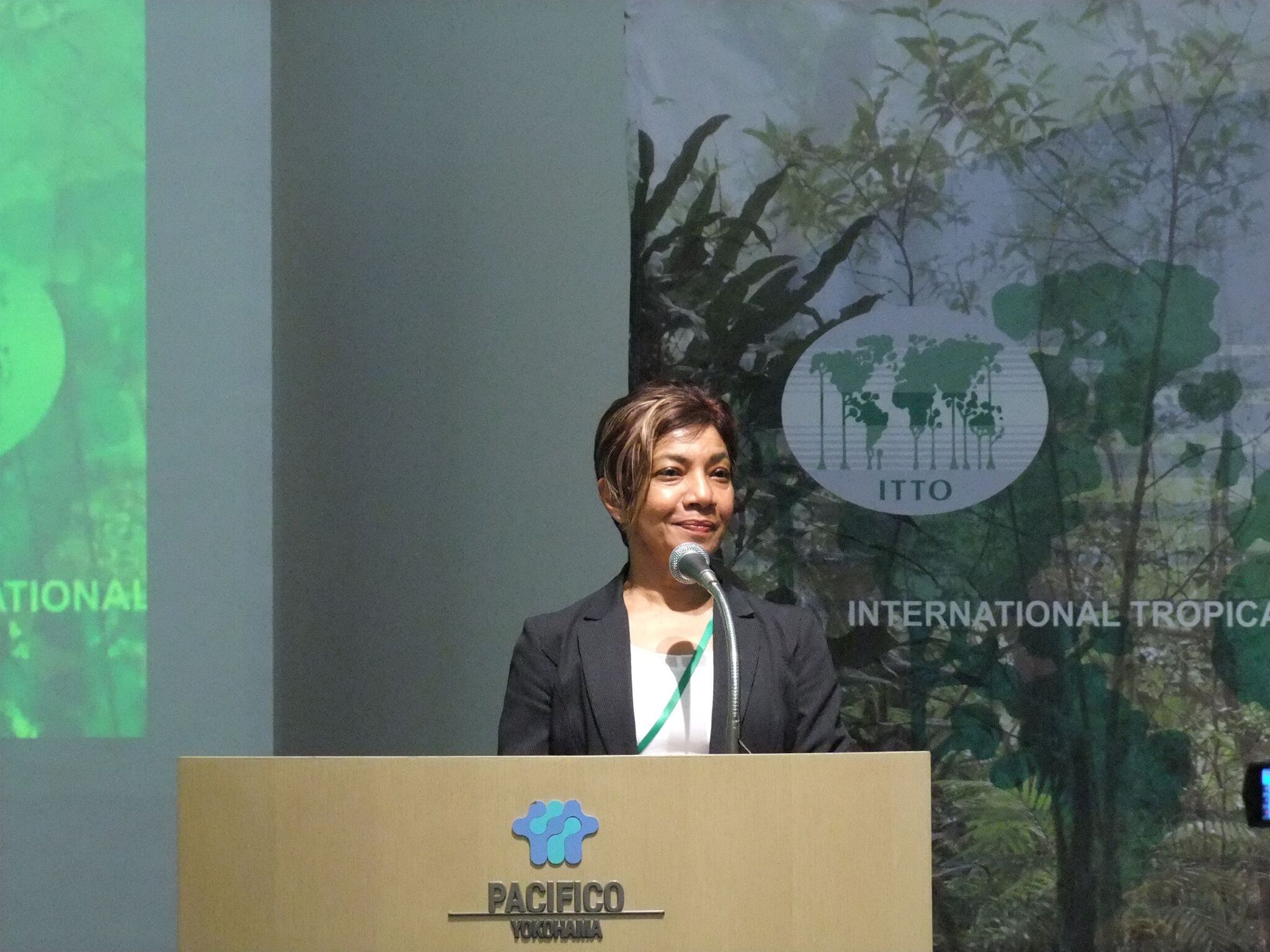 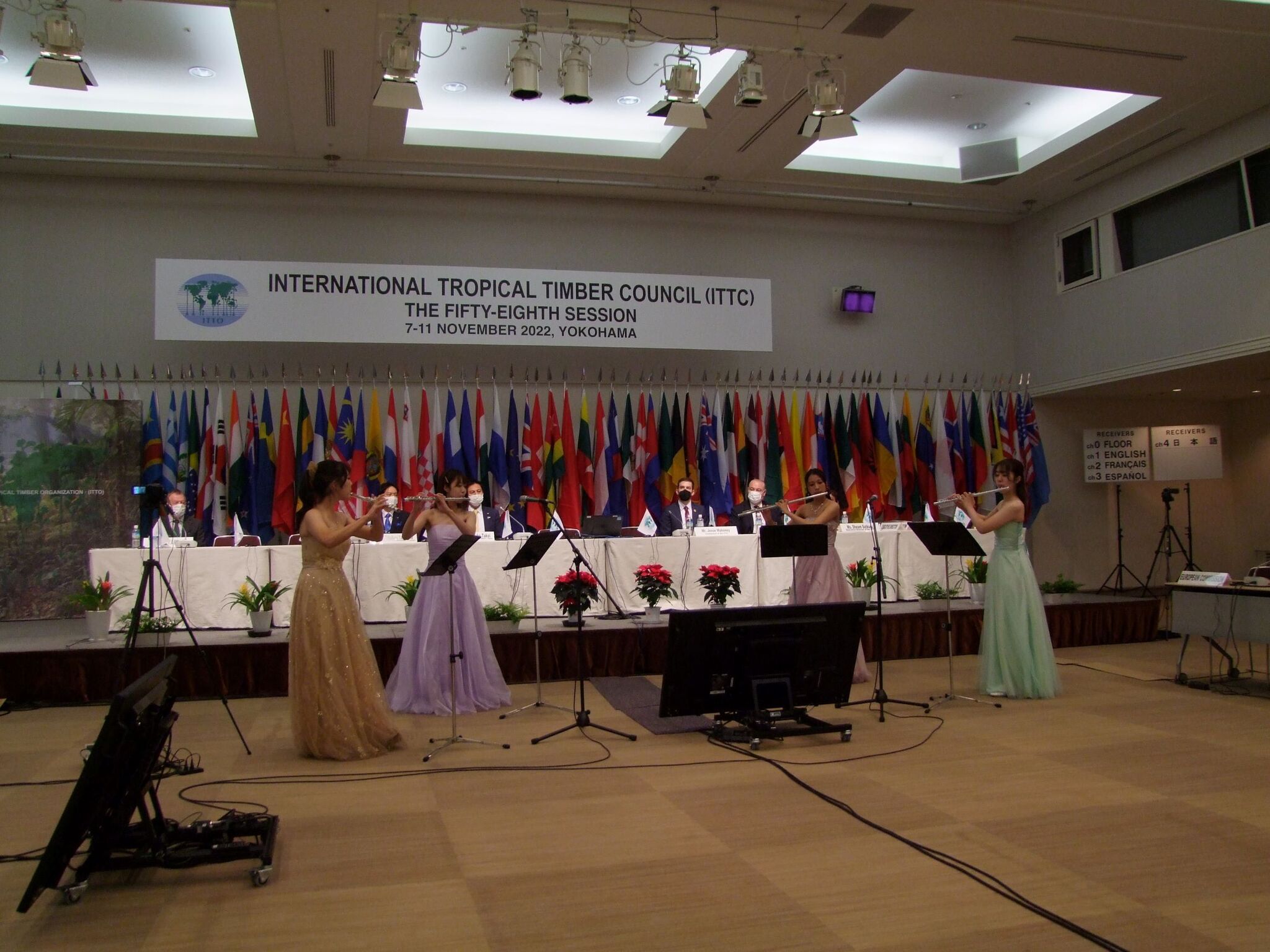 Performance by a flute quartet from the College of Music at Ferris University Yokohama. Photo: Y. Kamijo/ITTO 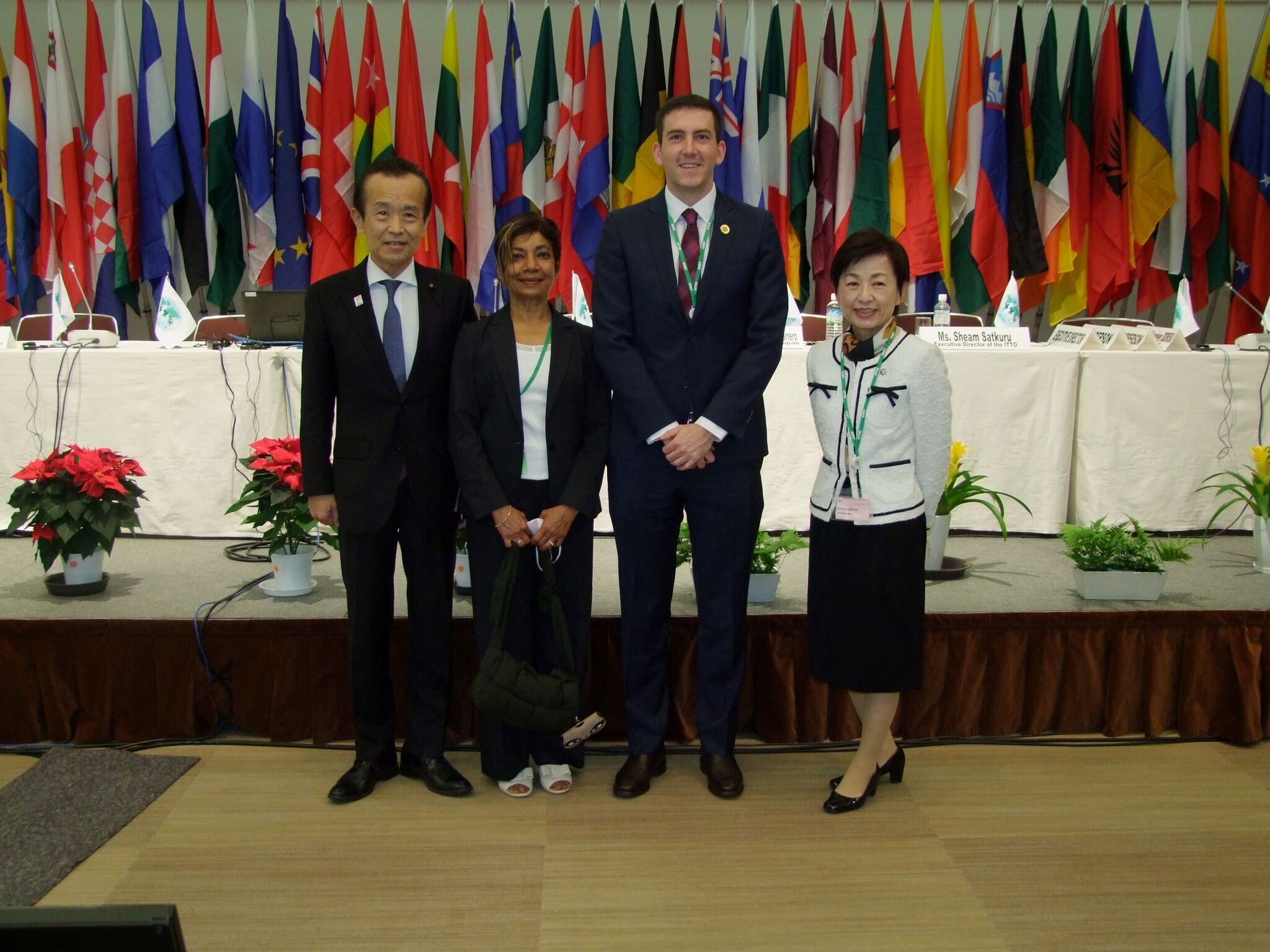 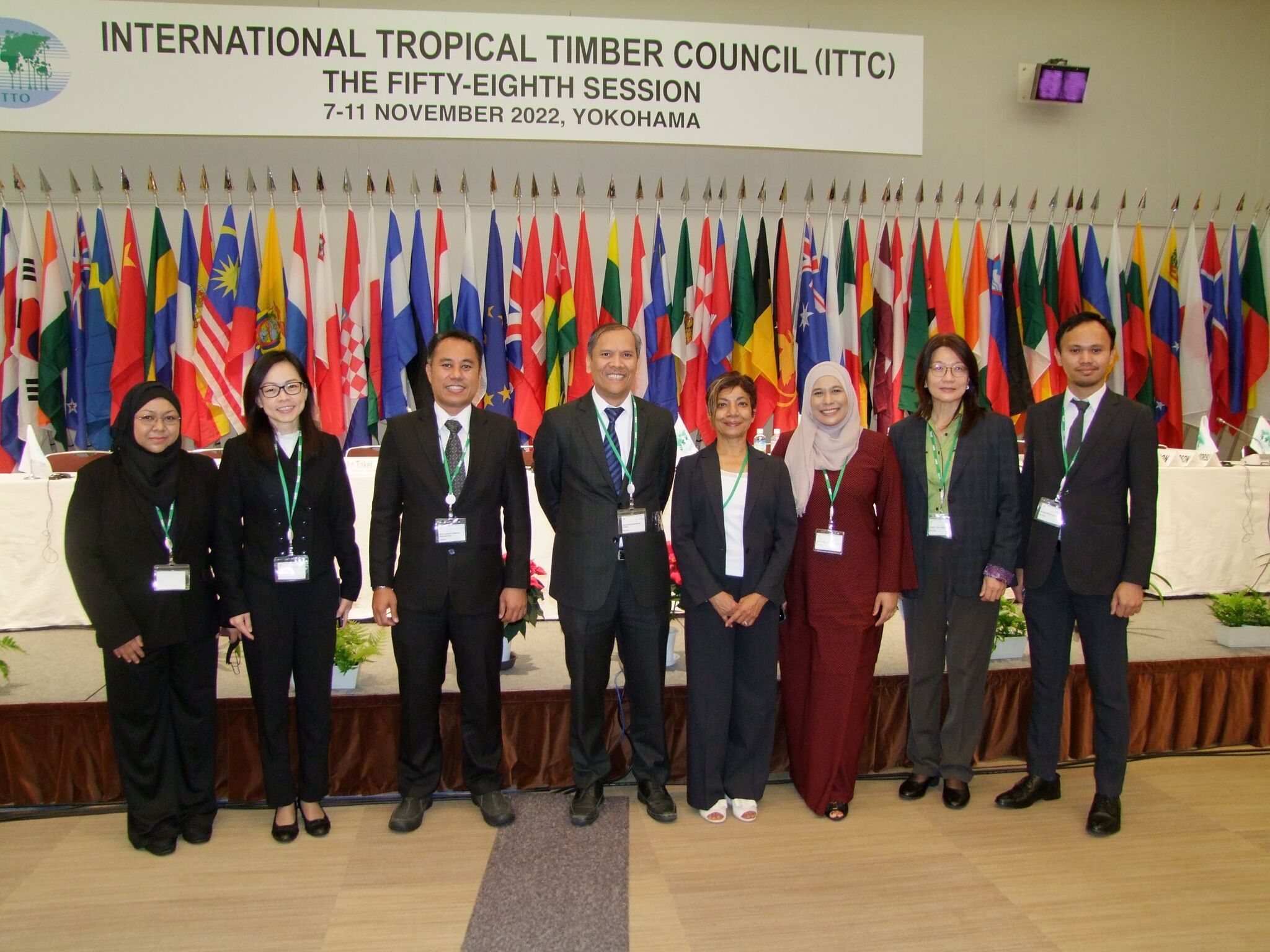 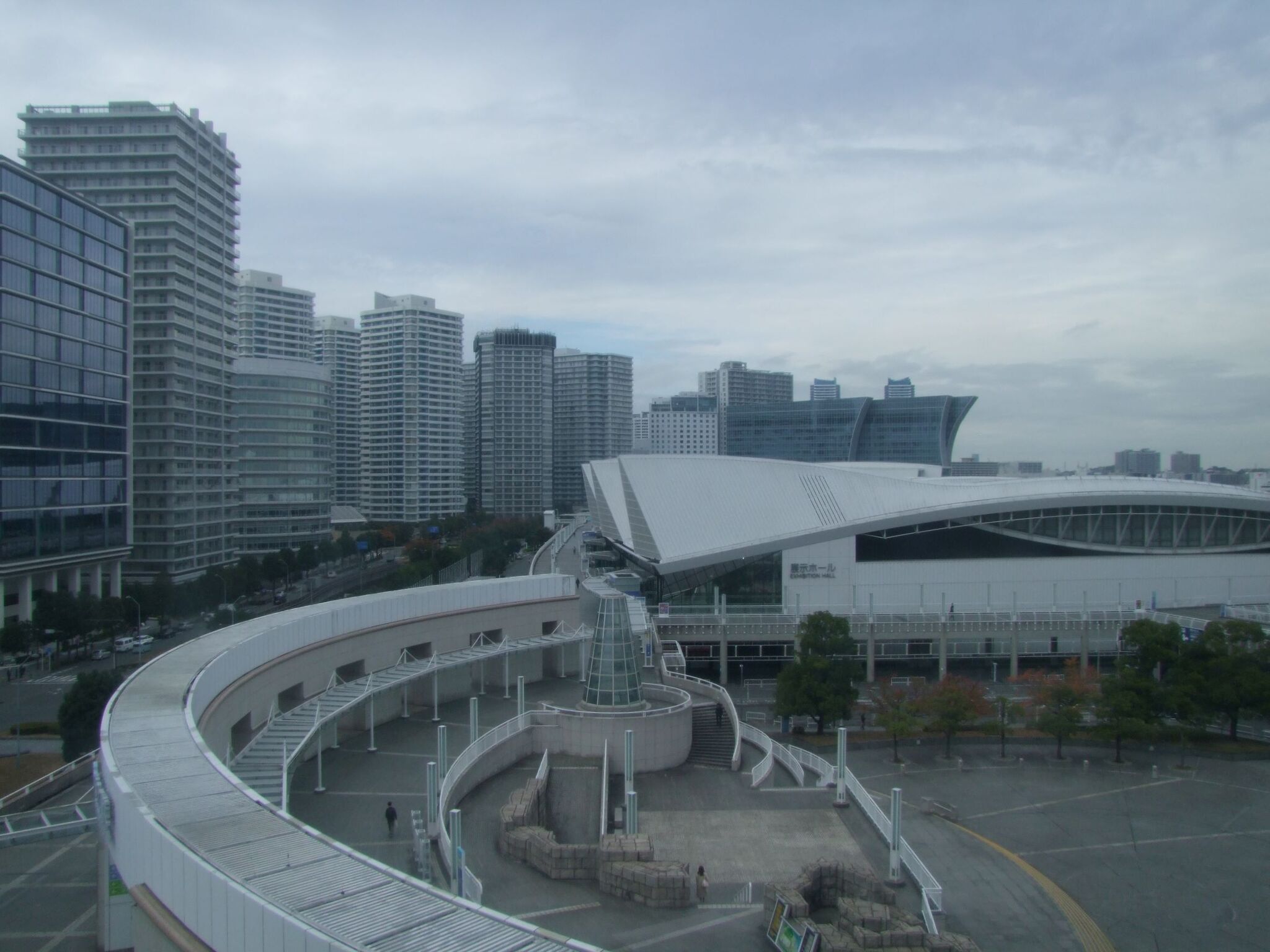 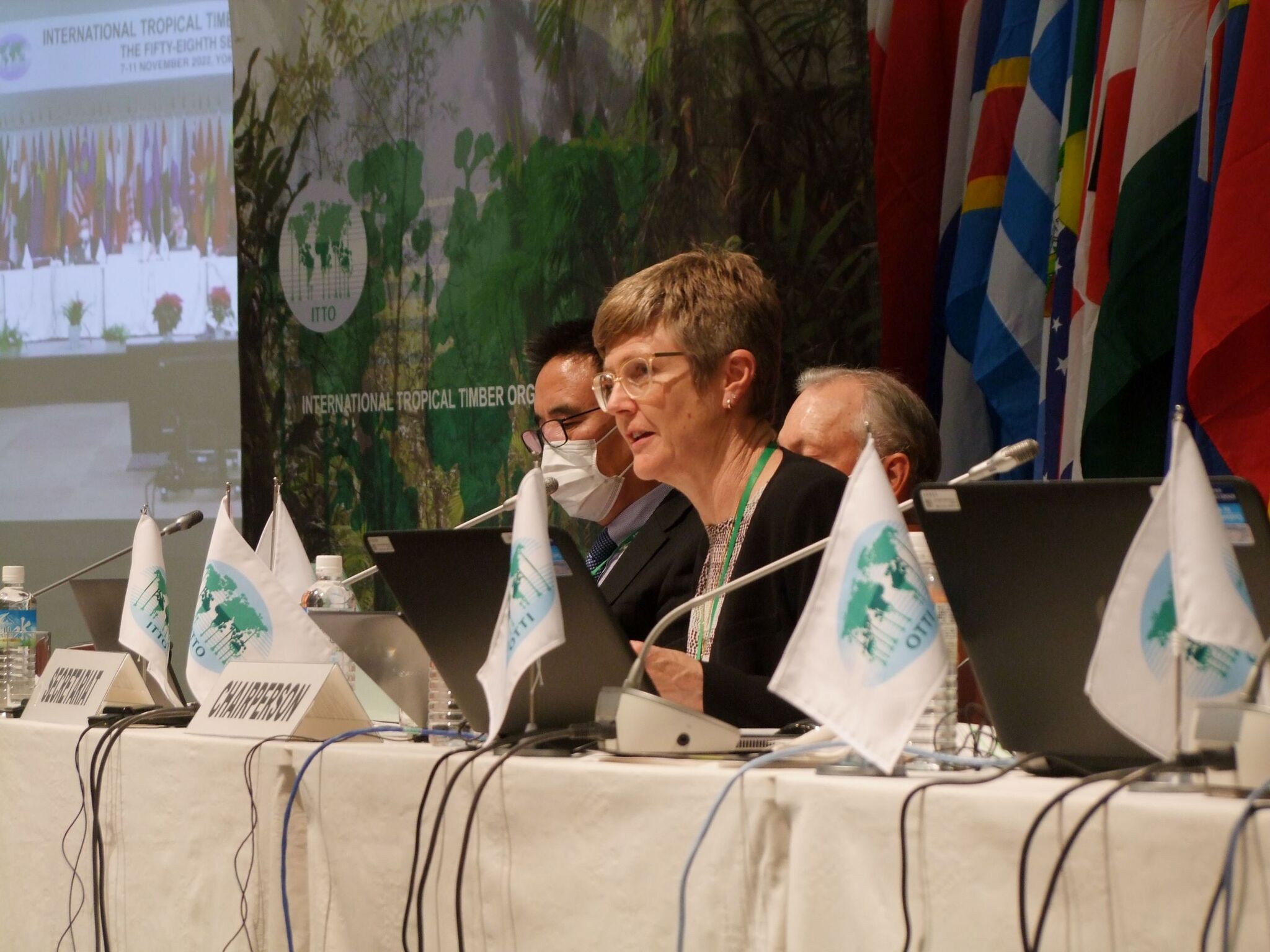 The Committee on Economics, Statistics and Markets and the Committee on Forest Industry meet jointly on day 1 of the 58th Session of the International Tropical Timber Council. Photo: Y. Kamijo/ITTO 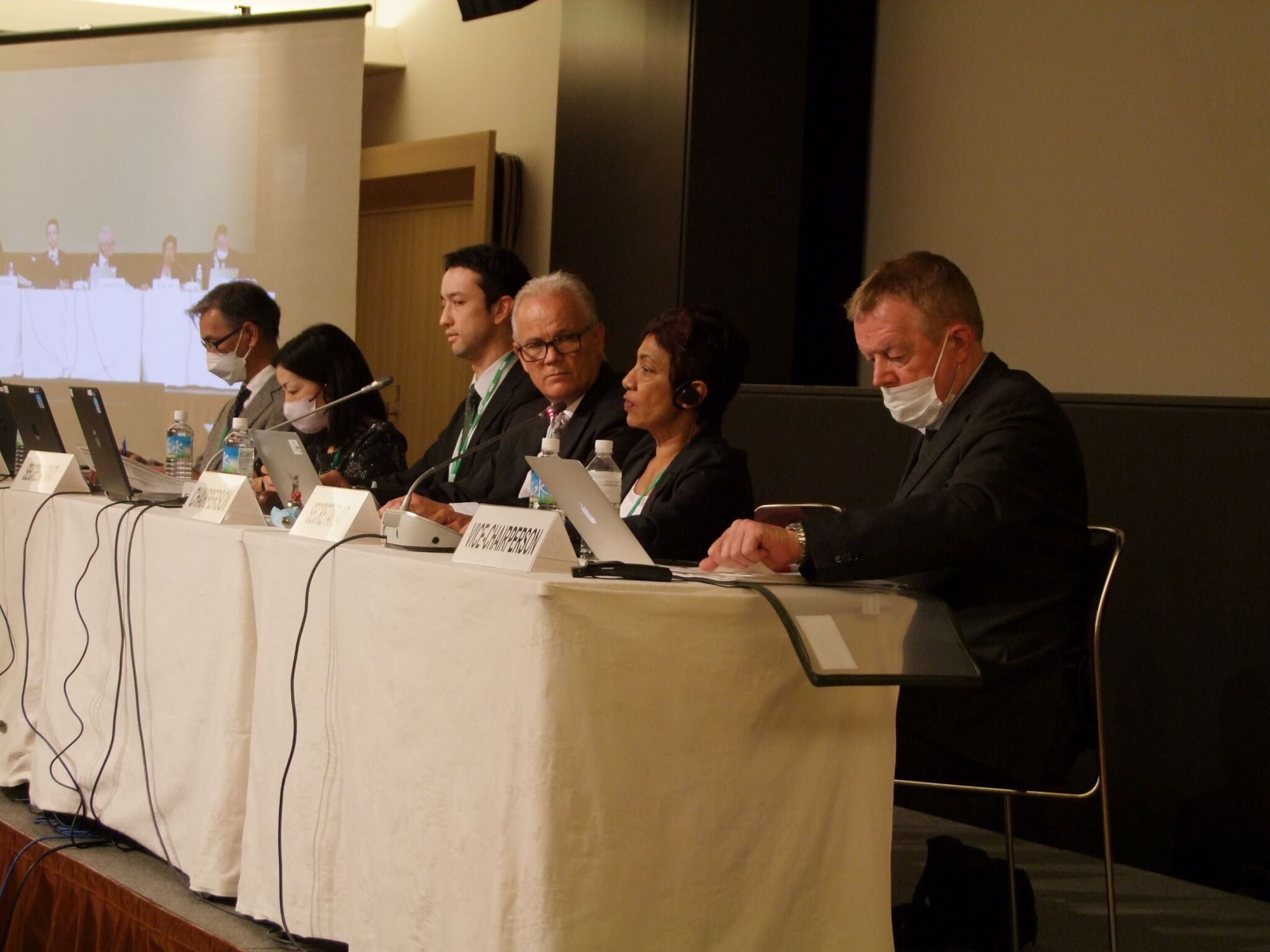 The Committee on Finance and Administration in session. Photo: Y. Kamijo/ITTO 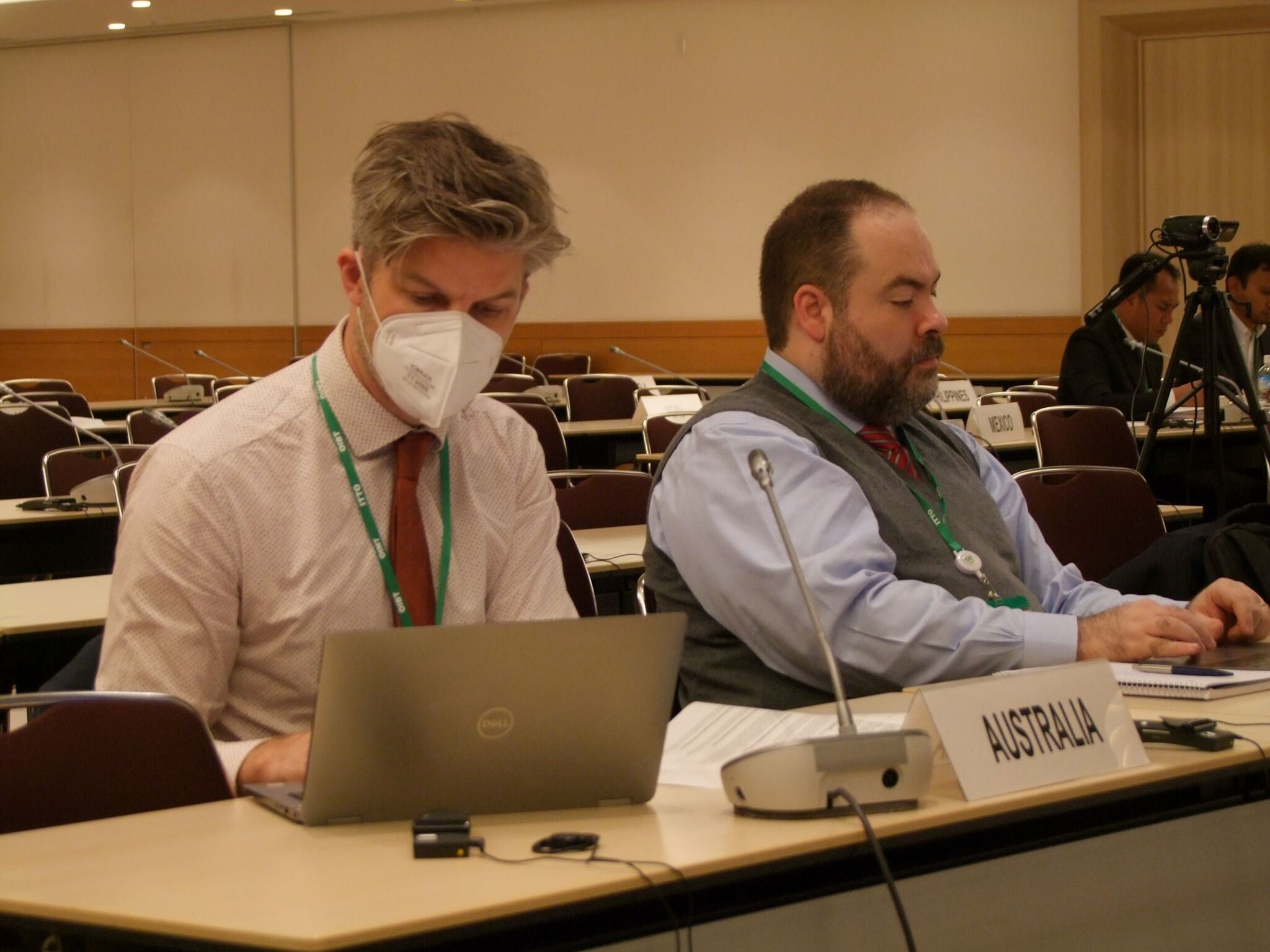 Delegates of Australia and Brazil on day 1 of the 58th session of the International Tropical Timber Council. Photo: Y. Kamijo/ITTO 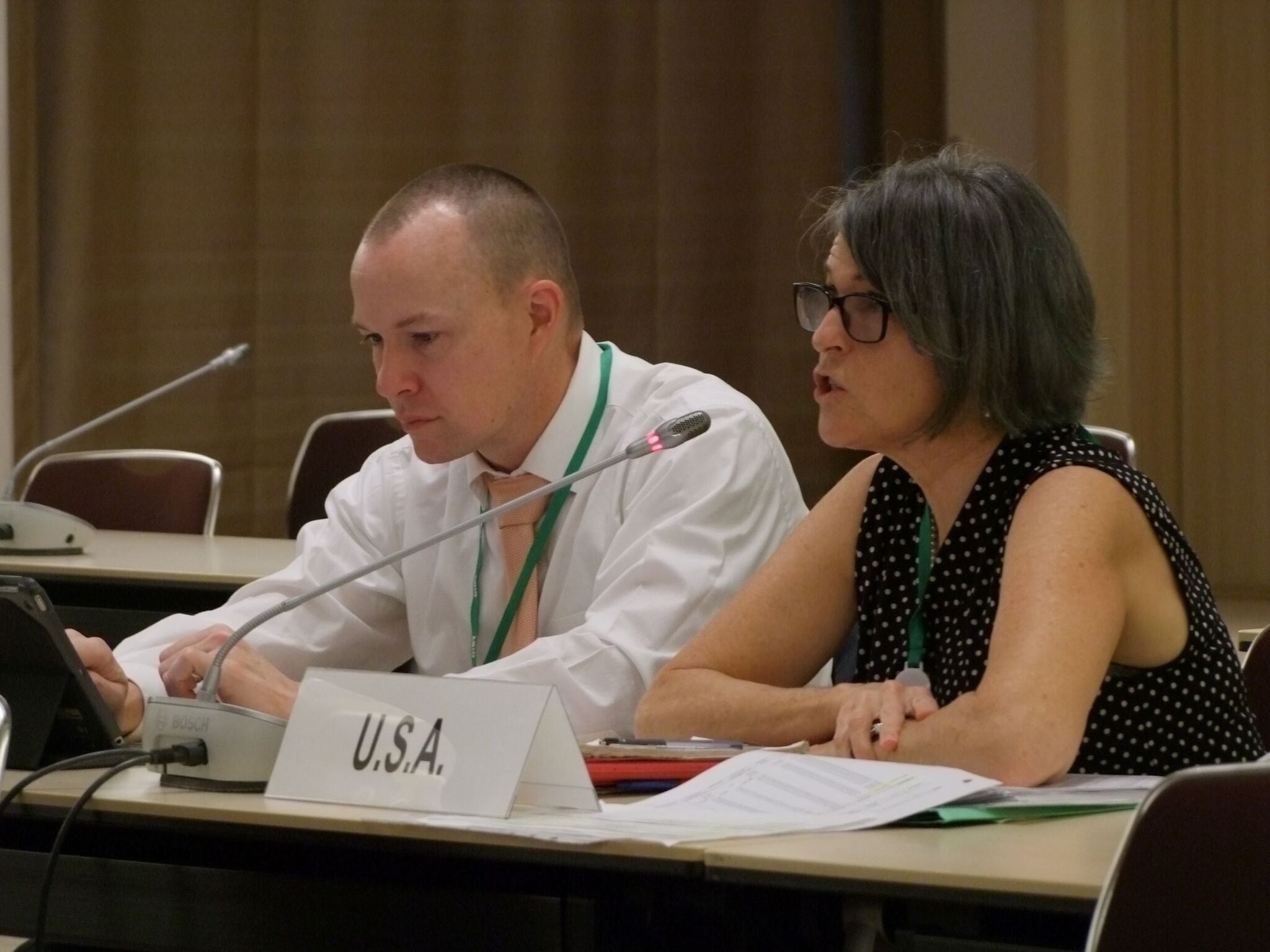 A delegate of the United States of America makes an intervention on day 1 of the 58th session of the International Tropical Timber Council. Photo: Y. Kamijo/ITTO 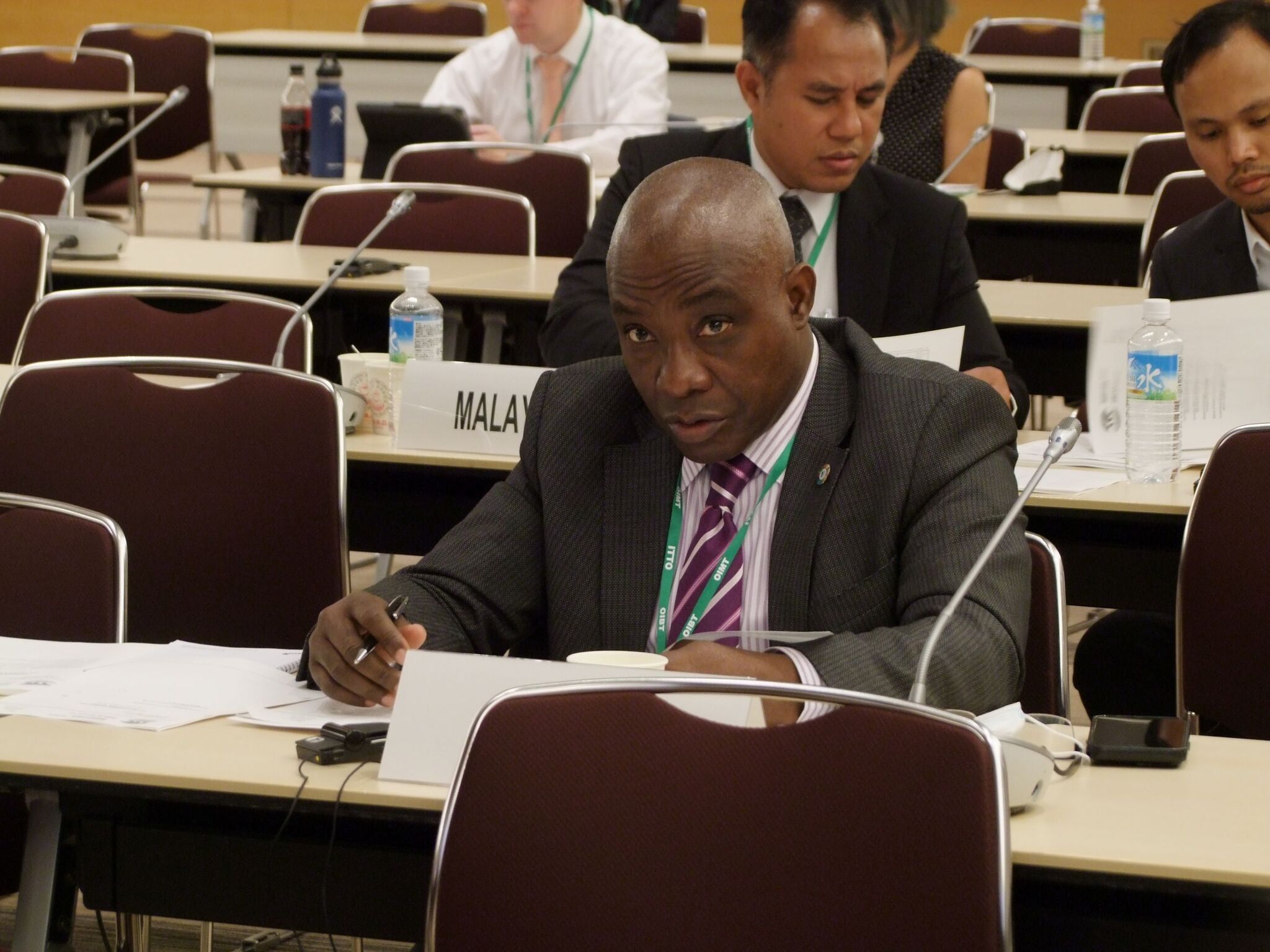 A delegate of Ghana makes an intervention on day 1 of the 58th session of the International Tropical Timber Council. Photo: Y. Kamijo/ITTO 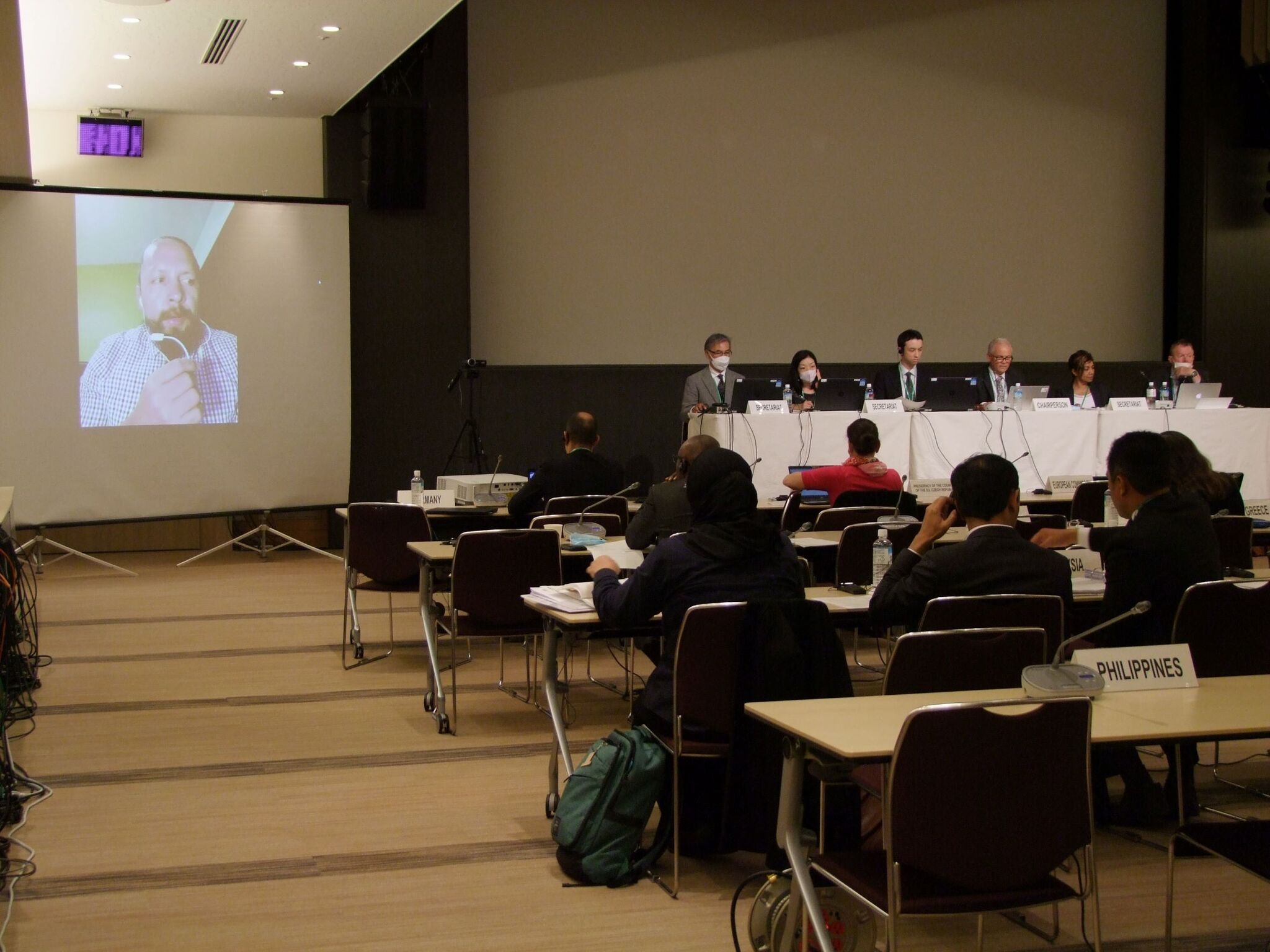 A delegate of Mexico makes an intervention on day 1 of the 58th session of the International Tropical Timber Council. Photo: Y. Kamijo/ITTO 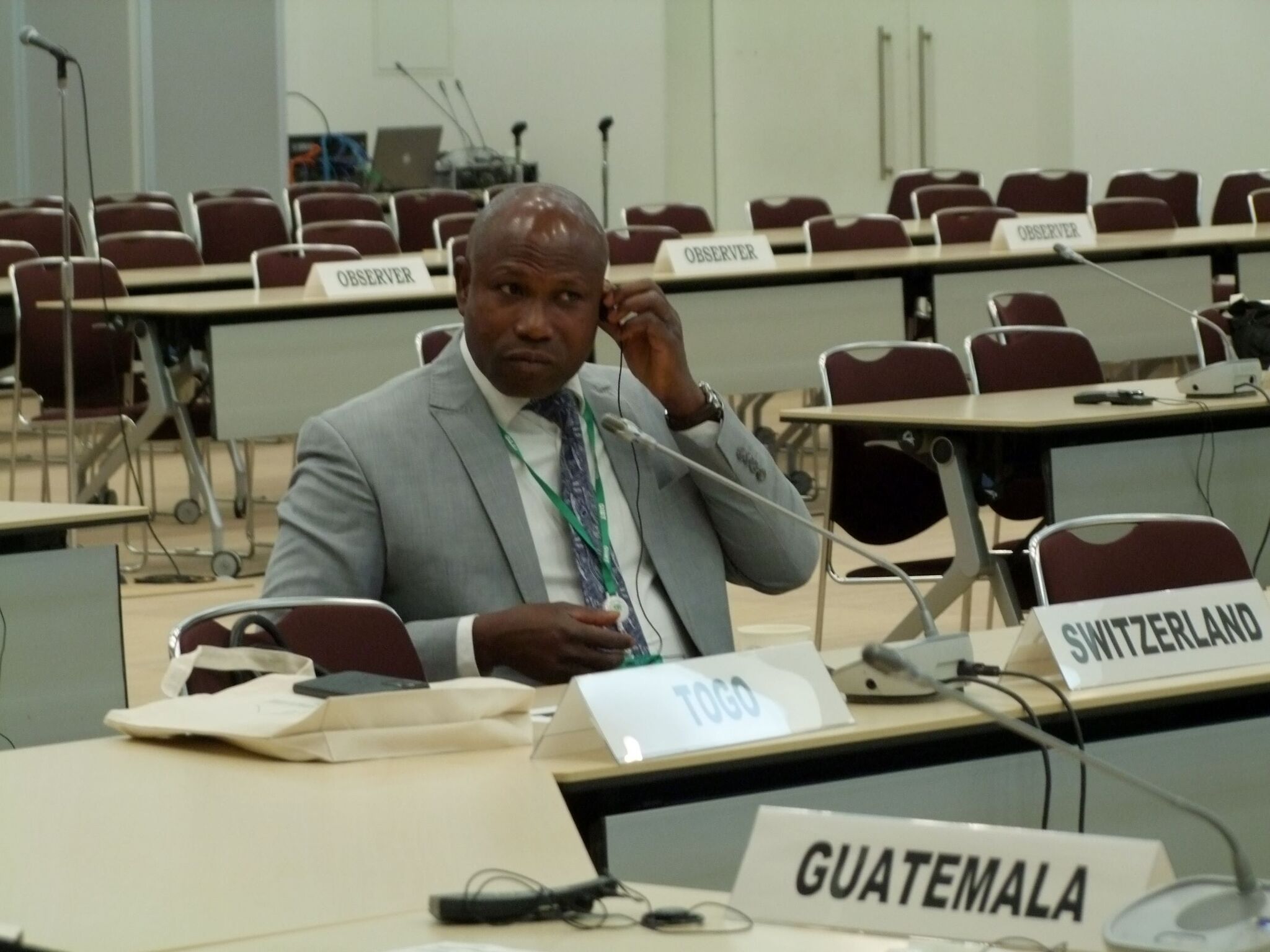 A delegate of Togo on day 1 of the 58th session of the International Tropical Timber Council. Photo: Y. Kamijo/ITTO 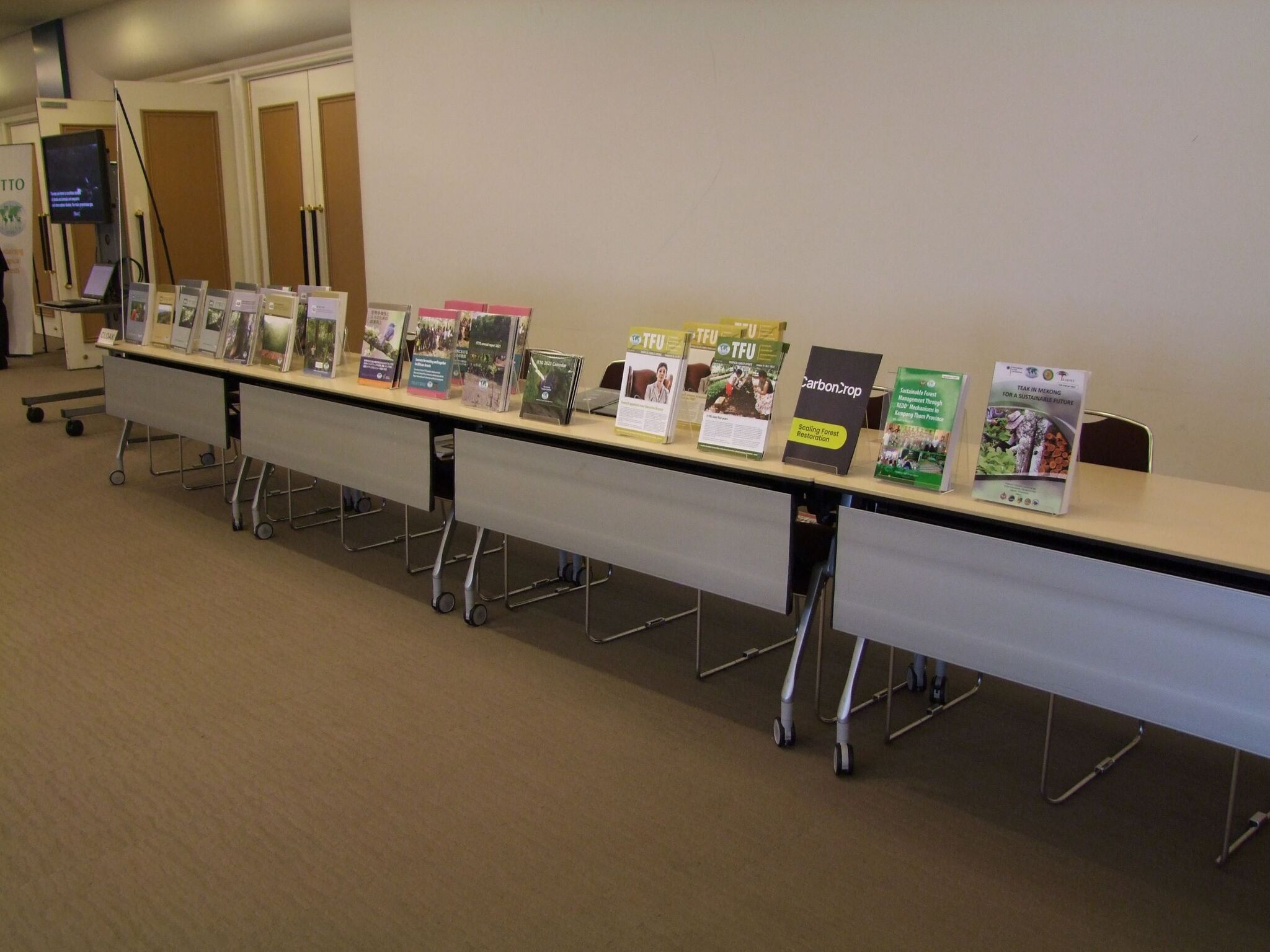 Around the venue. Photo: Y. Kamijo/ITTO 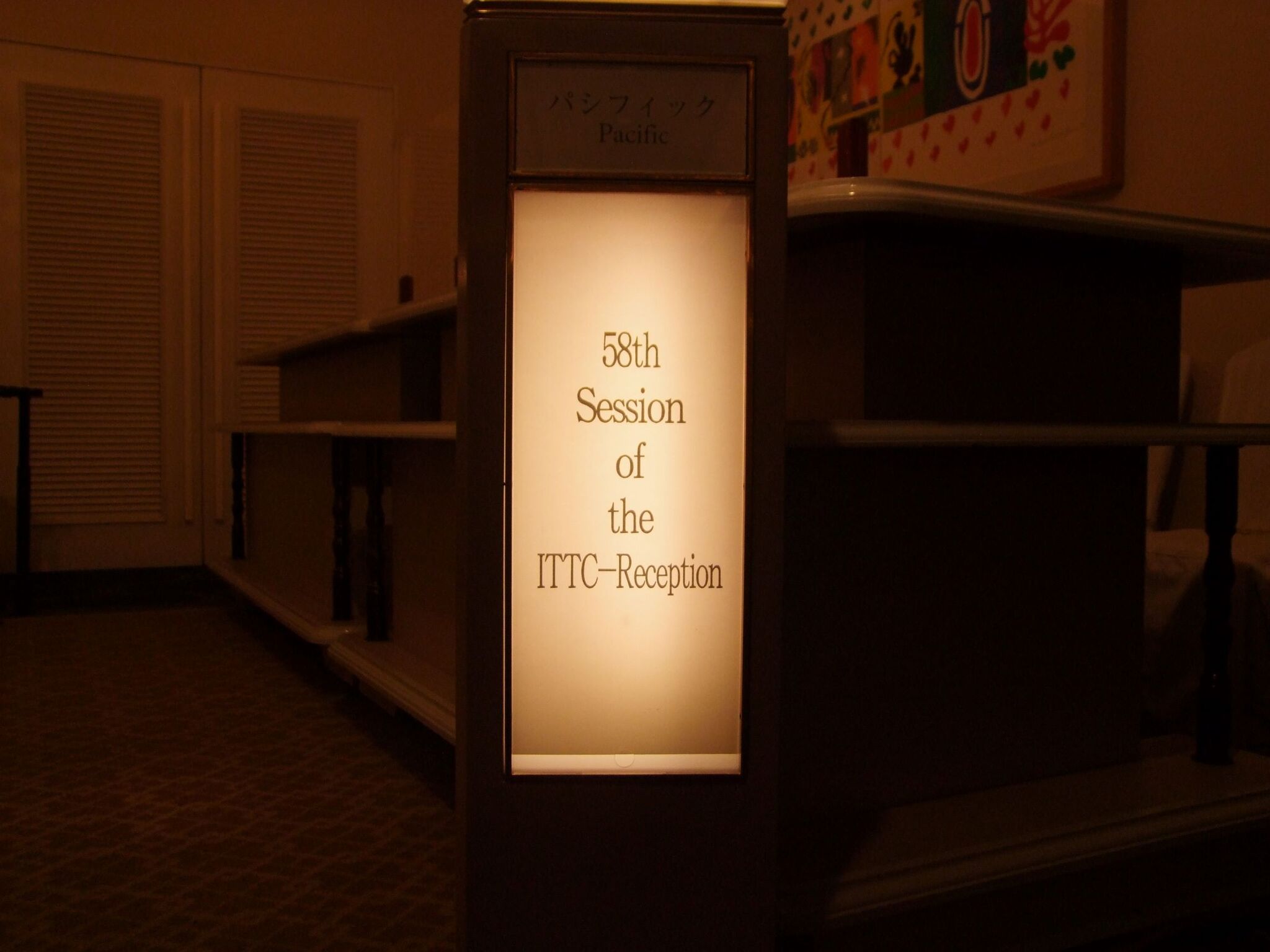 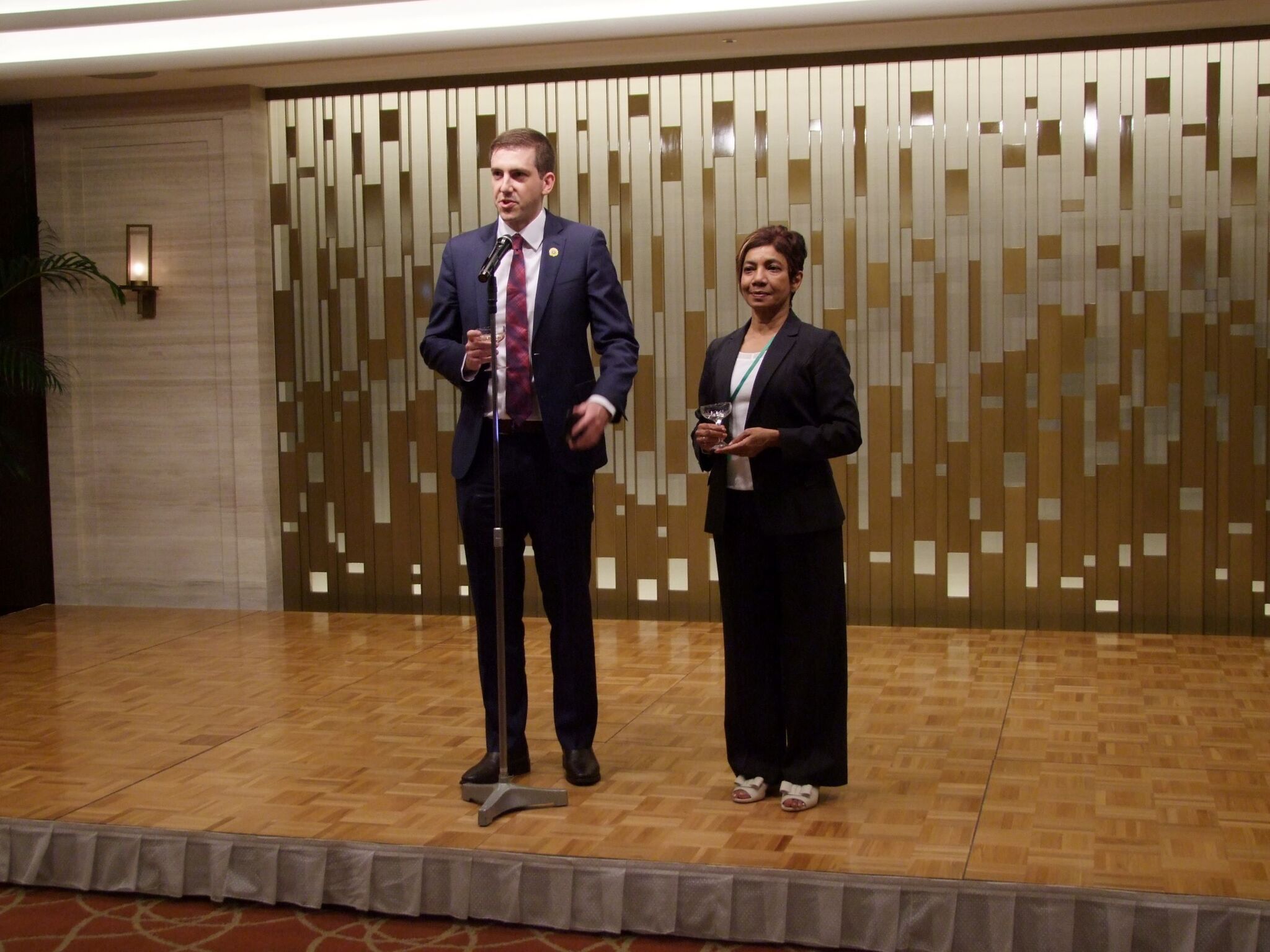 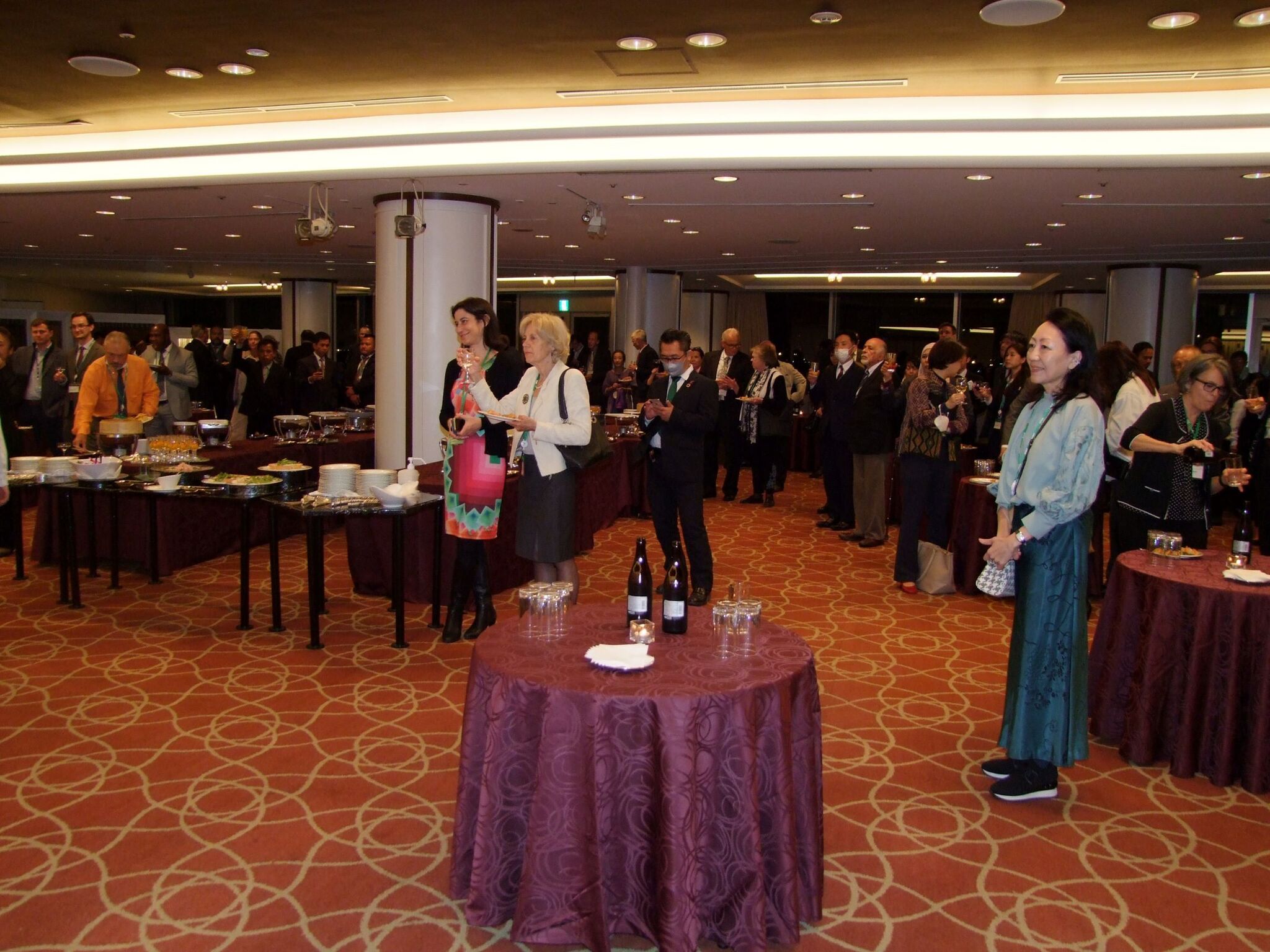 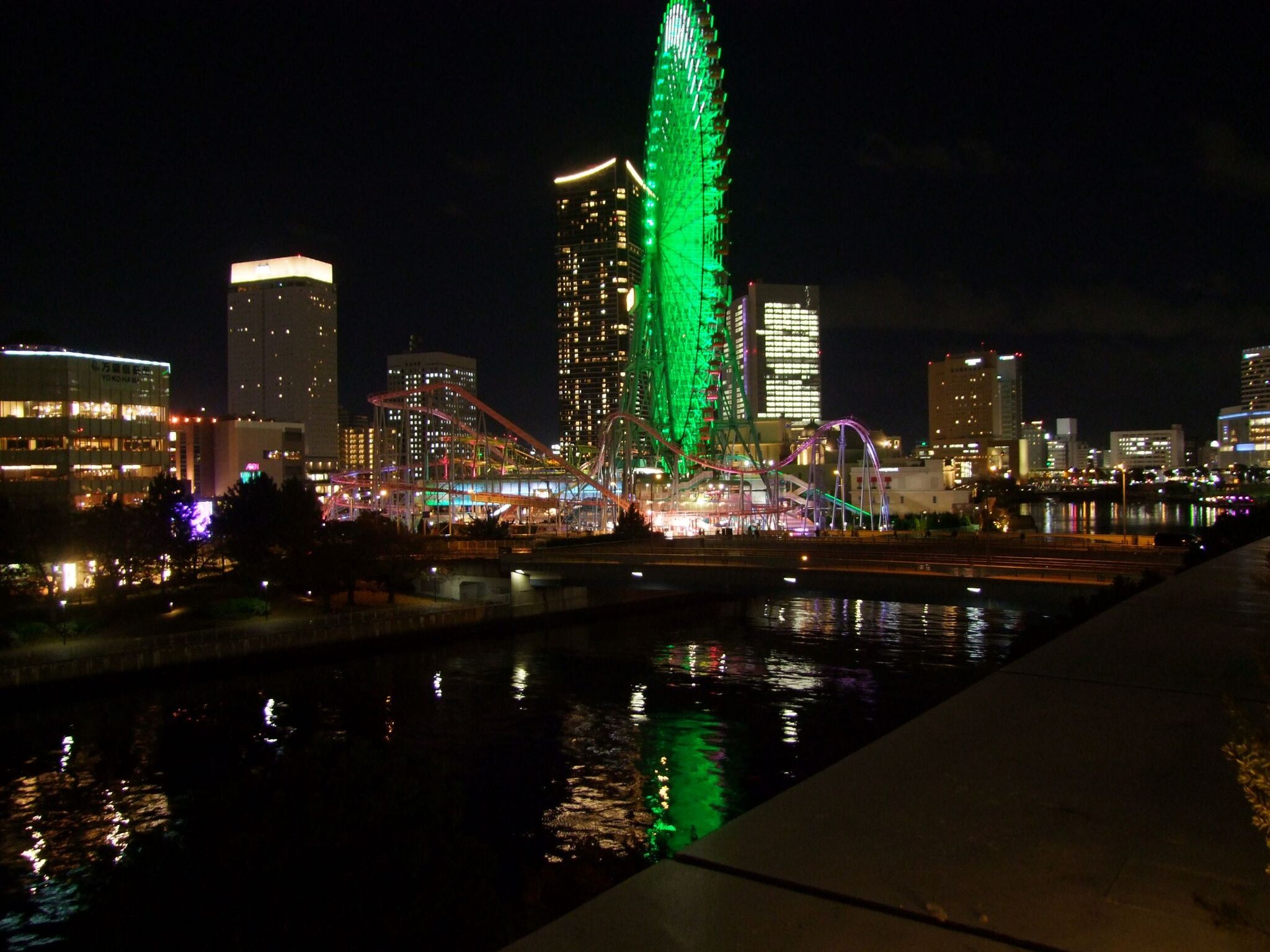