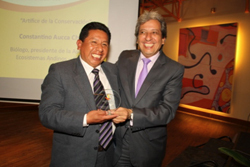 On 20 August 2013, Mr. Constantino Aucca Chutas, a national of Peru, received the conservation award Carlos Ponce del Prado 2013, from the Minister of Environment of Peru, Mr. Manuel Pulgar Vidal for his work in the preservation of biodiversity in Peru.

During an interview with the newspaper El Comercio, Mr. Aucca acknowledged the impact that the ITTO fellowship he received in 2008 had on his professional career and in getting a broader understanding of tropical forest management of the needs of the people who live in the forest.

Mr. Aucca’s interview with El Comercio is available at: http://elcomercio.pe/actualidad/1615733/noticia-reconocen-cusqueno-como-artifice-conservacion-nuestro-pais

For more information on the ITTO fellowship programme, click here.