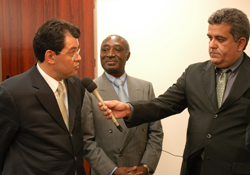 Governor Eduardo Braga was accompanied by several state officials as well as Brazilian media representatives during his one day visit to ITTO, part of an Asian mission to attract investment and development opportunities. Amazonas covers 157 million ha (almost triple the size of France) but still makes up only a third of the Brazilian Amazon territory. Due to low population pressure and a focus on non-extractive economic development associated with a free trade zone established surrounding the capital city Manaus, Amazonas boasts the most intact forest ecosystem in the Amazon. The large-scale deforestation that has occurred in other parts of Brazil due to agricultural expansion, mining and unsustainable logging has been largely kept at bay in Amazonas, which is 98% covered by healthy forests. Governor Braga’s plan is to keep it that way by implementing a “green” free trade zone in Amazonas that will promote sustainable development through a large and well managed network of protected areas, supported by forestry, fisheries and agricultural production systems that are ecologically sound, socially fair and economically viable. This Zona Franca Verde will also further development opportunities by providing ecosystem services such as carbon sequestration and fresh water, of which the state has the world’s largest above-ground supply.

Governor Braga has also implemented an innovative scheme to reward forest dwelling families and communities for helping to protect the forest. Under this Bolsa Floresta program, families receive a stipend of $25 per month for participation in forest conservation activities. The program also provides access to micro-financing (up to $2,000 per year) for communities undertaking sustainable forest management and conservation activities. These figures may appear small, but in a state with a per capita income of around $5,000 per year (and much less outside the Manaus free trade zone), the Bolsa Floresta program is making a difference and is one reason for the halving of the already low deforestation rate in Amazonas over the past 5 years.

The Amazonas delegation discussed collaboration with ITTO in the areas of community forestry (including ITTO work program activities on forest extension, forest law enforcement, transparency and phased approaches to certification) and administration of a planned forest concession system (including the design of a pilot project and bidding system). ITTO’s Executive Director Emmanuel ZeMeka pledged to work closely with the Governor and federal officials in Brazil to realize an active collaborative program to assist Amazonas in its goal of promoting sustainable development based on its huge forest resources. Governor Braga also accepted an invitation during his visit to attend and speak (together with his Secretary of State) at an ITTO side-event during the upcoming Conference of the Parties to the UN Framework Convention on Climate Change, scheduled for December 8 in Bali, Indonesia.

For more information on ITTO’s side event at the UNFCCC CoP and/or its work on sustainable forest management in Brazil and elsewhere, go to www.itto.or.jp