US$9 MILLION IN NEW FUNDS FOR TROPICAL FORESTS 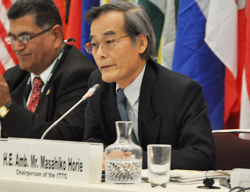 The International Tropical Timber Council (ITTC) announced today at the closing of its Forty-eighth Session additional funding of US$9 million towards the sustainable management and trade of tropical forest resources, including $3.6 million for the implementation of activities from a new work program for 2013-14. Funding announced at the Session included $6 million in new pledges as well as those made earlier in 2012.

The Council is the governing body of the International Tropical Timber Organization (ITTO). It meets at least once a year to discuss wide-ranging issues aimed at promoting sustainable tropical forest management and the trade of sustainably produced tropical timber. The Forty-eighth Session of Council, chaired by Japan's Global Ambassador for Environmental Affairs Masahiko Horie, was the first convened under the International Tropical Timber Agreement, 2006 (ITTA 2006), which entered into force in December 2011. The Council took several key decisions to facilitate its operations during the week, including approval of a new 2013-2018 Strategic Action Plan, adoption of new financial rules and procedures, establishment of new rules for the functions of the Committees that oversee ITTO's work, and adoption of procedures for implementing thematic programs provided for under the ITTA 2006.

Nearly half of the funding announced at the Session will support the implementation of nine new projects throughout the tropics and additional funding for three on-going projects. The new projects funded include, amongst others, assistance to forest concessionaires and communities to track timber products produced in Peru's Amazon regions; establishment of a buffer zone around a national park in Sarawak, Malaysia and the inclusion of local communities in its management; and establishment of a national forestry statistics system in Benin.

Pledges announced at the Session also included additional funding for the implementation of ITTO’s thematic programs on tropical forest law enforcement ($450,000), reducing emissions from forest degradation/ deforestation and promoting environmental services ($300,000) and trade/market transparency ($420,000). An on-going program to enhance members’ ability to implement CITES listings of tropical timber and tree species also received significant new funding under the biannual work program. Over $2 million was received by the ITTO-CITES program in 2012 from a group of donors led by the EU who are expected to provide a total of nearly $10 million to this program through 2015. Additional activities will be implemented throughout the tropics under all of these programs starting in 2013.

The funding made available for activities under ITTO’s 2013-2014 Biennial Work Program will also facilitate further revision of ITTO's guidelines for sustainable tropical forest management, strengthen work related to criteria and indicators for sustainable forest management, support statistical capacity building, enable ITTO’s participation in relevant international meetings including a joint meeting to be held with the Congo Basin Forest Partnership, support studies on life cycle analyses of wood products, enhance outreach and fundraising, and allow for establishment of a learning network for forest landscape restoration. The Freezailah Fellowship Fund was also topped up by Council, adding $300,000 to its resources to allow this valuable program to continue offering awards to deserving candidates.

Donors at this session were the governments of Japan, the European Union, Switzerland, the USA, Germany, the Netherlands, Australia, Finland, Korea and Sweden. Resources were also provided from ITTO's unearmarked funds, Program Support Fund and several private sector donors. Descriptions of all newly funded projects and activities will be published on ITTO’s website.

The Forty-ninth Session of the Council will be held in Libreville, Gabon from 25-30 November, 2013.