US$13.3 million in new funds for tropical forests 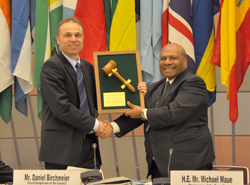 The International Tropical Timber Council announced today funding of US$3.5 million towards its recently approved thematic programs, including $2 million in initial funding for programs on community forest enterprises and trade and market transparency. The ITTC also announced an additional US$5.8 million for new projects and activities for the conservation and sustainable management, use and trade of tropical forest resources, which together with an announcement by Switzerland that it would make a US$4 million replenishment of its ITTO Trust Fund (to be used to fund future projects and activities) brought total pledges at the session to US$13.3 million.

The Council is the governing body of the International Tropical Timber Organization (ITTO). It meets at least once a year to discuss a wide-ranging agenda aimed at promoting sustainable tropical forest management and the trade of sustainably produced tropical timber. The funds pledged this week at its 45th Session are in addition to the US$2.2 million committed in the first half of the year, bringing the total pledged in 2009 to US$15.5 million.

This Council session financed 9 projects and 1 pre-project for a total amount of US$3.5 million, including a project in PNG to encourage customary landowners to reforest grasslands by planting high value tree species. Funds were also provided for projects to assess and develop management plans for typhoon affected mangroves in Myanmar, to promote a sustainable wood flooring industry in Brazil, to provide a silvicultural tool kit for industries and communities in Ghana for managing high value African mahogany, and to promote sustainable rubber wood utilization in Indonesia.

Council also adopted ITTO’s Biennial Work Programme for 2010-11 at this session and approved US$2.3 million in new or additional funding for activities contained in it. These included an activity to promote environmental education for children, another for an international conference on transboundary biodiversity conservation reserves, and an initiative to showcase forest industry technologies developed under ITTO projects. Funds were provided to assist countries in reporting progress in sustainable forest management based on ITTO’s criteria and indicators, and were also pledged to promote implementation of ITTO’s recently reformulated biodiversity conservation guidelines. Additional funding was pledged for ITTO’s on-going program to enhance members’ ability to implement CITES listings of tropical timber species. The Freezailah Fellowship Fund was also topped up by Council, to allow this valuable program to continue offering awards to deserving candidates.

The funding pledged to the thematic programmes at this session included additional funds of US$923,000 pledged to the programme on Forest Law Enforcement, Governance and Trade (TFLET) and US$575,000 to the programme on Reducing Deforestation and Forest Degradation and Enhancing Environmental Services in Tropical Forests (REDDES). These pledges bring the total funding pledged to these programs to nearly US$6 million and US$4.4 million, respectively. The initial funding of US$1 million each pledged to the programmes on Community Forest Management and Enterprises and Trade and Market Transparency will allow activities to commence soon under them. Information on the thematic programmes (including calls for proposals and information on activities funded under them) is regularly updated on ITTO’s web site.

The Council also reviewed the status of ratification by members of the International Tropical Timber Agreement, 2006 during its session. The entry into force of this successor agreement to the Organization’s current governing treaty (ITTA, 1994) has been delayed due to the slow pace of ratification by members. Only 25 of 60 current members have taken the necessary steps to accede to the new agreement to date, but Council noted that several other countries were well advanced in the process of ratification and accession. It agreed to extend the ITTA, 1994 and to review this issue again at its session in 2010.

Donors at this session were the governments of Japan, Switzerland, the UK, the USA, Norway, Finland, Korea and Sweden. Funds were also provided by the Japan Lumber Importers’ Association and other private Japanese donors.

The next session of the ITTC will be from 13-18 December 2010 (to be confirmed) in Yokohama, Japan. The Council also decided that its session in 2011 would be in Guatemala City, Guatemala and that it would also consider holding its 2012 meeting in a tropical producer country.

Descriptions of all newly funded projects and activities will be published in the next edition of ITTO’s Tropical Forest Update.