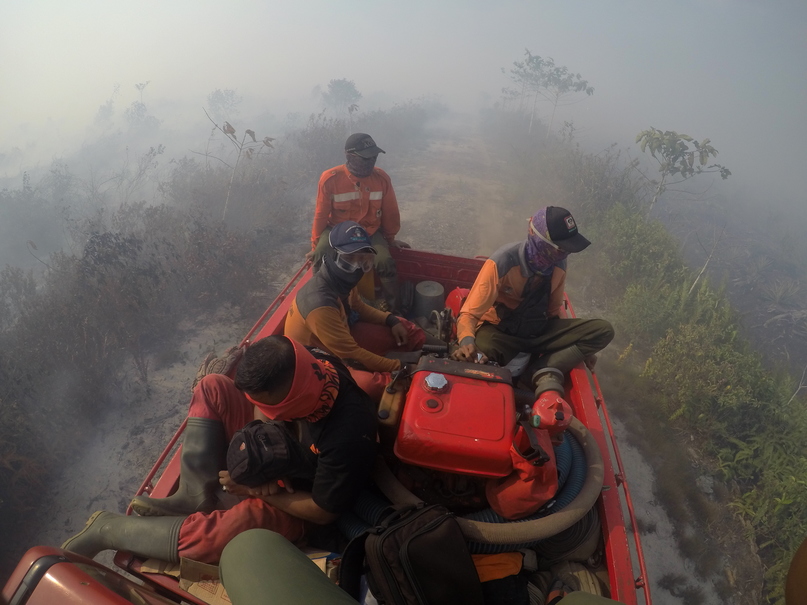 Improving fire management is increasingly urgent in the tropics, as shown by recent devastating fires in Borneo, the Amazon and elsewhere. As part of its long-running efforts to assist its member countries, ITTO announces the financing of two new projects—in Indonesia and Peru—aimed at addressing the threat of wildfire through integrated approaches to fire management.

The uncontrolled use of fire—aggravated by drought conditions and heatwaves—is a major cause of forest loss and degradation in Borneo and the Amazon. Reducing the incidence of wildfire requires effective fire prevention and management as well as mechanisms for rapid fire response. The two new projects1 will use integrated, participatory approaches to build capacity in fire prevention and management and help improve early-warning systems. Both projects, with a combined value of USD 2.2 million, are being funded as part of the Japanese Government’s emergency assistance for the effective management of forest fires in the tropics.

The projects will target regions that are especially vulnerable to forest fire—the provinces of South Sumatera and Central and South Kalimantan in Indonesia, and the departments of Cajamarca, Huanuco, Junin, Pasco and Ucayali in Peru. Expected outputs include a reduction in the incidence of forest fire and associated forest loss; improved agricultural and silvicultural practices; improved fire prevention and management and early-response protocols; improved firefighting capacity; the installation of efficient early-warning and fire monitoring systems; effective coordination and synergies among stakeholders in combating and preventing forest fires; and increased public awareness of fire management.

The projects build on the successes of previous fire-related ITTO projects and the ITTO Guidelines on Fire Management in Tropical Forests, which were published in 1997. Over the years, ITTO’s assistance for the development of integrated forest fire management have included community participation in fire protection; fire pre-suppression measures (e.g. weather and fire-danger forecasts and early-warning and reporting systems); and training, extension and public awareness-building.

The projects will be implemented by the Directorate of Forest and Land Fire Management in the Ministry of Environment and Forestry in Indonesia and the National Forest and Wildlife Service (Servicio Nacional Forestal y de Fauna Silvestre) in Peru. The funding of the two projects fulfils the intention of the Government of Japan, announced at the 55th Session of the International Tropical Timber Council in Togo last December, to make a further contribution to the management of forest fire in the tropics.

___________
1 The projects mentioned in this article are: PP-A/56-340-1: "Capacity building on forest and land fire management in Indonesia"; and PP-A/56-340-2: "Forest fire prevention and response in tropical forests and forest plantations in Peru". Note that the former is formally an activity under the biennial work programme; and the latter is a modified version of a project, the proposal for which was submitted and approved previously through the ITTO project cycle.