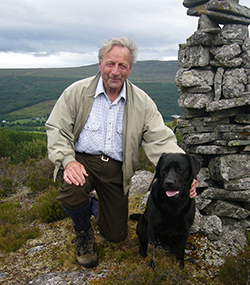 Duncan poses with Sukey on a Highland walk in 2006: Photo: J. Blaser

It is with immense sadness that we convey the news of the passing of Professor Duncan Poore. Duncan was a good-humoured, honest and articulate man and a great advocate for tropical forests, and he was a friend of many of us at ITTO and in the international forestry community. He was a “founding father” of ITTO, and he continued to support the Organization until his death. He died peacefully in March in his beloved Scotland, aged 90.

Duncan had a long and successful professional career. He received an MA in natural sciences with a specialization in botany, and a PhD from the University of Cambridge. He served as Professor of Botany and Dean of Science at the University of Malaya, Kuala Lumpur; as Director of the Nature Conservancy in the UK; as Scientific Director and later Director-General at IUCN; and as Professor of Forest Science and Director of the Commonwealth Forestry Institute at the University of Oxford. He was also a Senior Research Fellow at the International Institute for Environment and Development, where he set up the Forestry and Land Use Programme. Duncan worked on many assignments with ITTO; for example, he led the first survey of sustainable forest management in timber-producing countries in 1987, later published as the landmark book No Timber Without Trees, and he helped prepare the first ITTO Action Plan. He served on ground-breaking ITTO missions to Sarawak and Bolivia aimed at promoting sustainable forest management, helped ITTO develop criteria and indicators for assessing progress towards sustainable forest management, and was a co-author of ITTO’s Status of Tropical Forest Management reports in 2006 and 2011.

ITTO and Earthscan published Duncan’s book, Changing Landscapes, in 2003, in which he canvassed the history of ITTO and provided arguably the best existing analysis of the Organization’s strengths and weaknesses. He concluded that ITTO “has been influential in altering and refining the nature of the forest debate out of all proportion to its size and budget”.

Duncan was a positive thinker who took a long-term view. He advocated an adaptive approach to tropical forest management, writing in Changing Landscapes that adaptive management:

“is to give a grand name to something that has been practised by nomadic pastoralists, for example, for centuries—perhaps millennia. It is, in effect, to fit management operations to the needs of the moment. Private forests in Europe, where there is a centuries-old tradition of forest management, are seldom managed to produce a regular income. They are managed, instead, as accumulating capital assets that can be tapped when there is a need to raise capital (to put a new roof on a house or provide a dowry for a daughter) or when there is a special market opportunity. Much farm forestry in the tropics is managed on the same principles. I suggest this is a possible way forward for the sustainable use of tropical forests. A prerequisite will be secure tenure … (T)his system would draw from the forests what was required for local use and what was marketable at any time—including, for example, high-value timbers. It would retain the structure and diversity of the forest and therefore its flexibility. Rather than forest capital being dissipated, it would be encouraged to accumulate; at the same time, the increase in standing biomass would make a contribution to carbon storage.”

Duncan is survived by Judy, whom he married in 1949, two sons – Robin and Alasdair – and their families, and Sukey, Duncan and Judy’s much-loved dog. Duncan and Judy lived for many years in a remote part of the Scottish Highlands, where they were famous for their hospitality. They built an annex to their house that hosted many working groups, including for ITTO.

We mourn the passing of Duncan Poore, a man who always strived to make the world a better place. He played a crucial role in shaping global forest policies and institutions, and he left us with a body of work containing great knowledge and insight. For these things, and for his fundamental humanity and the true friendship he offered, we are grateful.

“Duncan was a towering personality in the development and growth of the ITTO throughout its entire history. He was involved in drafting the original International Tropical Timber Agreement and subsequently played a key role in ensuring the required level of ratifications for its entry into force. ITTO's pioneering work on criteria and indicators and guidelines on sustainable tropical forest management owe much to his expertise and vast knowledge. In the unprecedented and politically sensitive ITTO mission to Sarawak, Duncan's participation was vital. He also undertook many and often challenging assignments when he thought he could add value to ITTO's work. Many will miss this great gentleman and true friend.”  -Dato’ Dr B.C.Y. Freezailah, inaugural Executive Director of ITTO


“Duncan was one of the sharpest, most eloquent and most engaging people I’ve met in my time in tropical forestry. He was sincere in his efforts to bring about positive change, he was generous with his time and unfailingly polite, and he cared a great deal about tropical forests, their peoples and their supporters. He was the lynchpin of three crucial ITTO reports on the status of tropical forest management, the first of which—“No Timber Without Trees”—set the stage for much of ITTO’s subsequent work. Duncan’s outstanding work, interests and contributions transcended the forest sector, as evidenced in the powerful book he edited in 1999, “Where Next?”, which reflected on the future of humanity and examined the present dilemmas from different perspectives. We will all miss Duncan but will be comforted by his legacy.”  -Dr Manoel Sobral Filho, Director, United Nations Forum on Forests and former ITTO Executive Director


"Duncan was a lovely, smart, thoughtful man who made an enormous impact on the people around him and the issues that concerned him. One of the great conservation leaders of his generation, he was deeply valued by the global forest community to which he contributed so much over a lifetime of dedication and inspiration. Duncan’s passion was tropical forests and motivating us all to understand that with the right tools and approaches these marvellous resources could be managed for the benefit of people today and tomorrow. It was a great privilege and pleasure to work with him and to learn from him over the years. The world was a better place with Duncan in it, and it has lost something with his passing." -Stephanie J. Caswell, former Chairperson of the International Tropic Timber Council