Loss of a friend 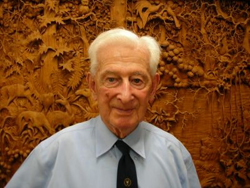 ITTO lost a long-time supporter and friend when Alfred John (Alf) Leslie passed away on 24 January 2009 in New Zealand following complications from a stroke suffered in late 2008. Alf had a keen interest in tropical forestry and was invited by ITTO's first Executive Director (Dr. Freezailah) to assist him lay the groundwork for the work of the Organization when it commenced operations in 1986. Alf remained deeply engaged with ITTO and its work over the next 22 years, contributing to many of the Organization's key initiatives. In an interview shortly before his death, Alf rated his role in helping to establish ITTO as one of his greatest professional achievements.

Alf will be sorely missed by his family and all of his colleagues at ITTO and elsewhere throughout the forestry world. His funeral will be on February 5 (which would have been his 88th birthday) at 11am at Alexandra House Chapel, 570 Alexandra Street, Te Awamutu, New Zealand, followed by private cremation. In lieu of flowers, Alf's family is accepting donations for a memorial grove of trees to be established in his native Australia at the Creswick campus of the University of Melbourne's Department of Forest and Ecosystem Science (where Alf spent many years of his "retirement" teaching and supervising post-graduates). Bank details are included below for those who may wish to contribute.

ITTO's Tropical Forest Update issue 18/4 will include a full obituary of this remarkable forester and close friend of ITTO.

The eulogy can be downloaded as a word file (.doc) above.