US$8.6 million in new funds for tropical forests 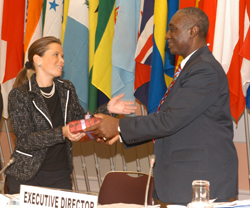 YOKOHAMA, JAPAN, 8 November 2008: The International Tropical Timber Council announced today funding of US$3.5 million towards a new program aimed at reducing deforestation and forest degradation in the tropics and an additional US$5.1 million for new projects and activities for the conservation and sustainable management, use and trade of tropical forest resources.

The Council is the governing body of the International Tropical Timber Organization (ITTO). It meets at least once a year to discuss a wide-ranging agenda aimed at promoting sustainable tropical forest management and the trade of sustainably produced tropical timber. The funds pledged this week at its 44th Session are in addition to the US$3.1 million committed in the first half of the year and announced in a June meeting in Accra, Ghana, bringing the total pledged in 2008 to US$11.7 million.

This Council session financed 11 projects and 2 pre-projects for a total amount of US$3.9 million, including two projects to assist Liberia to develop its forest policy and revive forestry education in the wake of its emergence from a long period of conflict. Funds were also provided for projects to manage bamboo forests in the north-western region of Peru, to develop an approach to integrated forest fire management in Panama, and to assist rural communities with the sustainable utilization and marketing of non-timber forest products including handicrafts in the Philippines. The Freezailah Fellowship Fund was also topped up by Council, to allow this valuable program to continue offering awards to deserving candidates.

The Council also approved US$1.1 million in new or additional funding for several activities under ITTO’s 2008-2009 work program. These included an activity to study developments and progress in timber procurement policies and another to update and field-test ITTO’s Guidelines for the Sustainable Management of Natural Tropical Forests, and additional national training workshops on the application of criteria and indicators for sustainable tropical forest management. Funds were also pledged to enhance the capacity of small and medium-sized enterprises to produce and trade legal and sustainable timber and to assist members in formulating and implementing an integrated forest-sector response to climate change. Additional funding was also pledged for ITTO’s on-going program to enhance members’ ability to implement CITES listings of tropical timber species.

In addition to Norway, other major donors at this session were the governments of Japan, Switzerland and USA.

The next session of the ITTC will be in November 2009 in Yokohama. The Council also agreed to convene a session in 2010 in Guatemala.

Descriptions of all newly funded projects will be published in the next edition of ITTO’s Tropical Forest Update.