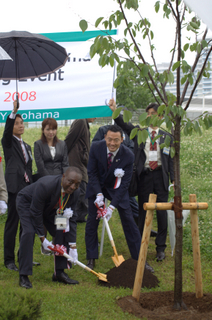 A tree-planting ceremony was held today in Yokohama's Rinko park to commemorate the 4th Tokyo International Conference on African Development. The ceremony, co-hosted by the International Tropical Timber Organization (ITTO) and the City of Yokohama, was attended by numerous dignitaries from African nations, grade 4 pupils from St. Maur International School and members of the public.

ITTO's Executive Director, Emmanuel Ze Meka, opened the ceremony by noting that the Organization has been working with tropical countries for over two decades to promote sustainable forest development. Over 150 projects had been implemented in Africa during this period and work continues to help countries in this region who are among the hardest hit by deforestation and forest degradation, and who will be severely impacted by the effects of climate change on their environments and economies. Mr. Ze Meka praised the efforts of Yokohama, ITTO's host city, to support this work, including the City's collaboration on this important commemorative event.

The mayor of Yokohama, Hiroshi Nakada, stressed the importance of turning symbolic activities like this tree-planting into action in the forest, noting that ITTO has been an effective mechanism of delivering field-level action in tropical countries' forests. The mayor, together with the chairman of the Yokohama City Council, Koichi Fujishiro, stressed that Yokohama was committed to promoting sustainable development at home and abroad, and that the city would remain engaged with ITTO and others to achieve this objective.

Following several touching messages calling for safeguarding of the environment from the St. Maur school children, dignitaries and participants proceeded to the tree-planting event. This involved the planting of trees native to Japan (cherry or sakura) as well as of several specimens of erica, a small tree/shrub native to Africa. The latter were planted in a border that mapped out the African continent.

For more information on ITTO and TICAD, or on the Organization in general, go to www.itto.or.jp.