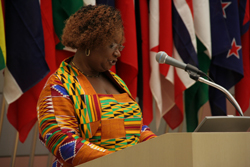 YOKOHAMA, JAPAN, 5 November 2007: A new biennial work program and a long-term strategic action plan are likely to be adopted at the 43rd session of the International Tropical Timber Council, which begins today in Yokohama, Japan.

The Council is the governing body of the International Tropical Timber Organization (ITTO). It meets twice a year to discuss a wide-ranging agenda aimed at promoting sustainable tropical forest management and the trade of sustainably produced tropical timber.

Emerging issues such as the relationship between climate change and tropical forests will feature in the Council’s deliberations on a new Action Plan and Work Program throughout the week. According to ITTO's new Executive Director, Emmanuel Ze Meka, "ITTO can and must take a leading role in forest-related climate change mitigation." This view was echoed by Council Chairman Luis Macchiavello Amoroz in his opening remarks to the Council, noting the continuing destruction of tropical forests and ITTO's unique role in promoting sustainable forest management.

Also speaking at the opening session was Yokohama Mayor Hiroshi Nakada, who expressed his city’s continued support for ITTO, and Mr. Osamu Uno, Japan’s Vice-minister of Foreign Affairs, who called for wider donor support of ITTO’s activities. Elvis Ngolle Ngolle, Minister of Forestry and Wildlife, Cameroon, was among many dignitaries speaking at the opening session who praised the contributions of ITTO’s out-going Executive Director, Manoel Sobral Filho, while welcoming Mr. Ze Meka as the Organization’s third Executive Director.

In her remarks to the opening session, Ghana’s Minister of Lands, Forestry and Mines, Esther Obeng Dapaah, expressed gratitude to the Netherlands and other ITTO donors for their contributions to an important new program on Tropical Forest Law Enforcement and Trade. She invited Council members to her country for the 44th session in June 2008.

Daniel Ahizi Aka (Minister of Environment and Forests, Côte d’Ivoire) and Emile Doumba (Minister of Forest Economy, Water, Fisheries and National Parks, Gabon) also addressed the Council at its opening session. Minister Ahizi Aka thanked ITTO for continuing to support his country during its recent period of conflict and instability, and invited ITTO to continue to support Côte d’Ivoire as it rebuilds its forest sector. Gabon’s Minister Doumba stressed his country's continued support for ITTO, particularly in light of the new objectives and scope of the International Tropical Timber Agreement (ITTA), 2006, which his country is preparing to ratify.

The Council will also deal with several other key issues at its 43rd session. The status of ratification of the new ITTA will be reviewed and thematic programs to be implemented under it discussed. The Council will receive reports on, among others, progress towards sustainable forest management in Nigeria, and civil society/private sector partnerships to promote sustainable forest management and certification. Revised guidelines for the conservation of biological diversity in tropical timber producing forests will be reviewed and Council will undertake its annual assessment of the world timber situation. There will also be a lunchtime side-event hosted by the Council’s Civil Society Advisory Group (CSAG) to present its proposals for ITTO’s 2008-09 Work Program.

For more information on the Council session (including a link to daily reporting by the Earth Negotiations Bulletin – ENB), and on ITTO in general, go to www.itto.or.jp.