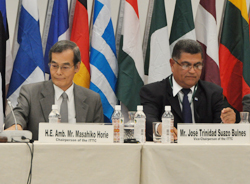 Issues such as strengthening ITTO’s work on biodiversity conservation in tropical forests and reviewing developments in climate change negotiations of relevance to tropical forests will also feature in the Council’s deliberations throughout the week. A review of implementation and effectiveness of five pilot thematic programs launched in 2008 will also be undertaken by the Council (thematic programs are a new targeted funding window explicitly provided for under the ITTA 2006).

The opening of the Council was preceded by a special event to highlight the importance of tropical forests and commemorate the entry into force of the ITTA 2006. This event was attended by various dignitaries, members of the public and Council members, and featured a performance by a group of Japanese school children highlighting the importance of the many products and services derived from tropical forests. ITTO's Executive Director, Emmanuel Ze Meka, in his opening statement to Council, updated members on the Organization’s activities during 2012 and enumerated the challenges and opportunities facing ITTO as it begins implementing the ITTA 2006, chief amongst which is the need to “accelerate the implementation of SFM in ITTO tropical member countries, based on the experience accumulated by the Organization over the past years.” Mr. Ze Meka also presented a plan to streamline the ITTO Secretariat and called on members to “search for compromise to achieve a result consistent with our goal for a healthy and effective Organization” when considering the first budget under the ITTA 2006. Mr. Ze Meka noted that while consumer membership under the ITTA 2006 had risen in comparison to the previous agreement, producer membership had (at least temporarily) fallen. Since this situation will result in extra demands on current producer members to support the Organization’s administrative costs, he called on all countries that were members under the previous agreement to complete formalities to remain members. Current ITTO membership consists of 38 consumers and 25 producers accounting for about 90% of global trade in tropical timber and around 40% of all tropical forests.

Acting Council Chairman José Trinidad Suazo Bulnes stressed the importance of countries working together to achieve SFM in the tropics under the new ITTA, calling on donors to increase support for ITTO work and echoing Mr. Ze Meka’s call for all countries who had not completed their arrangements to become members of ITTO under the ITTA 2006 to do so as soon as possible. Following these remarks, incoming Chairman Masahiko Horie (Ambassador for Global Environmental Affairs, Ministry of Foreign Affairs, Japan) was introduced by the consumer spokesperson and thereafter assumed the position of Council Chair.

Among the other dignitaries addressing the Council at its opening session were Philip Ngole Ngwese (Minister of Forestry and Wildlife, Cameroon), Jorge Viana (Senator, Federal Senate of Brazil), Amar Haji Awang Tengah Ali Hasan (Second Minister of Resource Planning and Environment, Ministries of Public Utilities and Industrial Development, Sarawak, Malaysia) and Atsushi Suginaka (Director, Global Environment Division, Ministry of Foreign Affairs, Japan). Minister Ngole Ngwese highlighted the importance of Africa’s forests in providing environmental services like biodiversity conservation and sequestering carbon, calling on the international market to provide equitable remuneration for such services. Senator Viana reviewed Brazil’s progress in reducing deforestation and improving forest management, recognizing ITTO’s assistance to Brazil and his home state of Acre. He also stressed the importance of ITTO remaining a strong Organization and indicated that his country’s membership of the ITTA would be decided on soon. Second Minister Datuk Amar noted the increase in the area of tropical forests under sustainable management over the past 25 years but stressed the many challenges that remained to achieve more widespread sustainability. He called on ITTO members to work together to overcome these challenges and referred to Sarawak’s progress in forest management since a groundbreaking ITTO mission in 1989. Mr. Suginaka reconfirmed Japan’s support for ITTO and called on the Secretariat and members to work together to meet the challenges facing the Organization, including fund raising. Eduardo Rojas-Briales (Assistant Director-General, Food and Agriculture Organization) and Jan McAlpine (Director, United Nations Forum on Forests) also addressed the Council at the opening session. Both praised the extensive and productive collaboration between their organizations and ITTO, including through the Collaborative Partnership on Forests, and called for such collaboration to be continued and strengthened under the ITTA 2006. Both also called for support for a proposal to establish an International Day of Forests currently being considered by the United Nations.

The Council will also deal with several other key issues at its 48th session. A new biennial work program for 2013-14 will be considered in order to synchronize the cycle of the biannual work programs with the proposed 2013-2018 duration of the new strategic action plan and other biannual requirements under the ITTA 2006. The Council will be briefed on collaborative activities to improve management of tropical tree species listed under the Convention on International Trade in Endangered Species (CITES). Council will also undertake its annual assessment of the world timber situation and, led by its Trade Advisory Group, will convene the annual market discussion on the theme “Trading in Challenging Markets”. Several side events are also scheduled during the week, including sessions on locally controlled forestry, new market requirements for tropical timber, Indonesia’s legality assurance system for forestry/forest products and Ecuador’s forest statistical system. Finally, Council will decide during the week on the funding of approved ITTO projects and activities, including 16 new projects submitted by members during 2012 seeking over $7 million; 19 projects submitted in previous years seeking over $8 million; additional funding for the five ongoing pilot thematic programmes; and funding for activities approved under the Organization’s 2012-13 biannual work program.