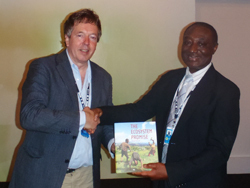 ITTO had an active presence at the UN Conference on Sustainable Development during the week of June 18-22. The Organization co-hosted a side event titled Harnessing Tropical Forests for the Transition to a Green Economy with the Japan International Cooperation Agency (JICA) on June 18. The event attracted over 70 participants, including high level officials from Japan, Brazil and Switzerland. The agenda of the event as well as the opening speech delivered by ITTO’s Executive Director Emmanuel Ze Meka can be downloaded below. During the cocktail that followed the ITTO-JICA side event, Mr. Ze Meka was presented with a complimentary copy of The Ecosystem Promise, a new book on ecosystem services partially funded by ITTO written by Dutch author Meindert Brouwer (author of Amazon Your Business). On June 19, ITTO participated in and Mr. Ze Meka chaired a high level event hosted by the Collaborative Partnership on Forests (CPF) titled The Landscape: Transformative Action through Cross-Sectoral Coordination. As well as the heads of most of the 14 members of the CPF, this event included forest ministers or heads of forestry from three countries (Gambia, Korea and the UK) as well as the current and past presidents of Guyana. ITTO also participated in various other events during the week, including a meeting of the CPF and special events on forestry in Acre and Amapa states of Brazil. Consultations were also undertaken with representatives of various member countries including high level Brazilian officials from both state and federal governments. One of ITTO’s representatives was interviewed about the Organization’s activities and objectives at Rio+20 by a journalist from Global Forestry Investments (see link below).