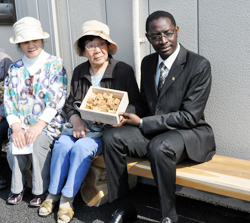 Mr. A.D.A. Bodjona, the Chargé d'affaires a.i. of Togo to Japan presents teak benches and teak toys to the people of Yamamoto, Tohoku Japan, who were affected by the events of March 11, 2011.

A handing-over ceremony of Togo teak benches to the Tohoku earthquake and tsunami affected area was held in Yamamoto town, Miyagi prefecture of Japan on 14 May 2012.  The ceremony was attended by the Chargé d'affaires a.i. of Togo to Japan, the Chairman of the Japan Youth Lumbermen's Association (JYLA), the Mayor of Yamamoto Town, and representatives of Japan’s Ministry of Foreign Affairs, the Japan Forest Agency and ITTO. Following the Tohoku earthquake and tsunami, ITTO launched an appeal to its member countries to assist the Government and people of Japan in securing building materials, including consignments of wood products as aid or donations to contribute to the process of reconstruction. In response to the appeal, many ITTO member countries have made valuable contributions in one way or another and the Government of Togo in particular has generously sent a shipment of thirty-seven cubic meters of teak logs to Nagoya in December 2011. The JYLA as the designated recipient has arranged for processing those logs into benches to be handed over to the disaster affected areas. Participants in the handing-over ceremony also paid a field visit to the temporary houses where the teak benches were placed and attended a reception hosted by JYLA.

A video showcasing ITTO’s contribution in the aftermath of the Great Tohoku Earthquake and Tsunami may be seen from the link below:
https://www.youtube.com/watch?v=1SUJhhat0Yo

More photos capturing the activity may be viewed at:
https://www.facebook.com/#!/TogoTeakProject