Entry into force of new treaty high on Council agenda 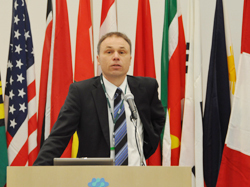 Consideration of the entry into force of the a new governing treaty will be a major item on the agenda of the 46th session of the International Tropical Timber Council, which began December 13th in Yokohama, Japan.

The Council is the governing body of the International Tropical Timber Organization (ITTO). It meets at least once a year to discuss a wide-ranging agenda aimed at promoting sustainable tropical forest management and the trade of sustainably produced tropical timber.

Issues such as strengthening ITTO’s work on biodiversity conservation and tropical forests and developments in climate change negotiations of relevance to tropical forests will also feature in the Council’s deliberations throughout the week. ITTO's Executive Director, Emmanuel Ze Meka, alerted Council to the Organization’s activities during the International Year of Biodiversity, stressing collaborative activities carried out with the secretariat of the Convention on Biodiversity and others. The Executive Director also urged Council members to strengthen the Organization by ratifying the 2006 International Tropical Timber Agreement (ITTA) and by providing adequate funding for its administrative and strategic activities. Council Chairman Daniel Birchmeier also stressed the importance of countries ratifying the new ITTA, noting that it would be desirable for the new agreement to enter into force in 2011 to meet the evolving challenges facing tropical forests during the International Year of Forests and ITTO’s 25th anniversary.

Also speaking at the opening session was Yoshitsugu Minagawa, the Director General of the Forestry Agency of Japan. Mr. Minagawa stressed the importance of tropical forests, including in providing environmental services like biodiversity conservation, and called for all members who had not done so yet to accelerate their process of accession to the ITTA, 2006. Yokohama Mayor Fumiko Hayashi also addressed the Council, noting the strong collaboration between her city and ITTO during the past 25 years. Mayor Hayashi pledged Yokohama’s continuing support for ITTO.

Elvis Ngolle Ngolle (Minister of Forestry and Wildlife, Cameroon), Henri Djombo (Minister of Sustainable Development, Forest Economy and Environment, Republic of Congo) and Martin Mabala (Minister of Water, Forests, Environment and Sustainable Development, Gabon) also addressed the Council at its opening session, all calling for action by ITTO to ensure that its projects and activities have access to secure sources of funding. Minister Ngolle Ngolle welcomed ITTO support to Cameroon which has, inter alia, assisted with improving forest law enforcement. Minister Djombo noted the draft Council decision submitted by his country at this session to convene a summit of the major tropical forest basins and called on Council to positively consider this proposal. Gabon’s Minister Mabala stressed his country's initiatives to promote sustainable forest management including those supported by ITTO. The forest sector’s key role in economic development is shaping the country’s policies in relation to forest carbon and biodiversity.

The Council will also deal with several other key issues at its 46th session. The status of the implementation of the five ITTO Thematic Programmes approved on a pilot basis at the 44th ITTC session will be reviewed. The Council will be briefed on progress towards a report on the status of tropical forest management and on collaborative activities to improve management of tropical tree species listed under the Convention on International Trade in Endangered Species (CITES). Council will also undertake its annual assessment of the world timber situation and, led by its Trade Advisory Group, will convene the annual market discussion on the theme “Innovations and Technologies in Wood Based Industries”. Several side events are scheduled during the week, including sessions on forest inventories and concessions in Brazil and Peru, meeting legality requirements in global markets, forest certification in the Congo Basin and gender in community based forest management (the latter convened by Council’s Civil Society Advisory Group).