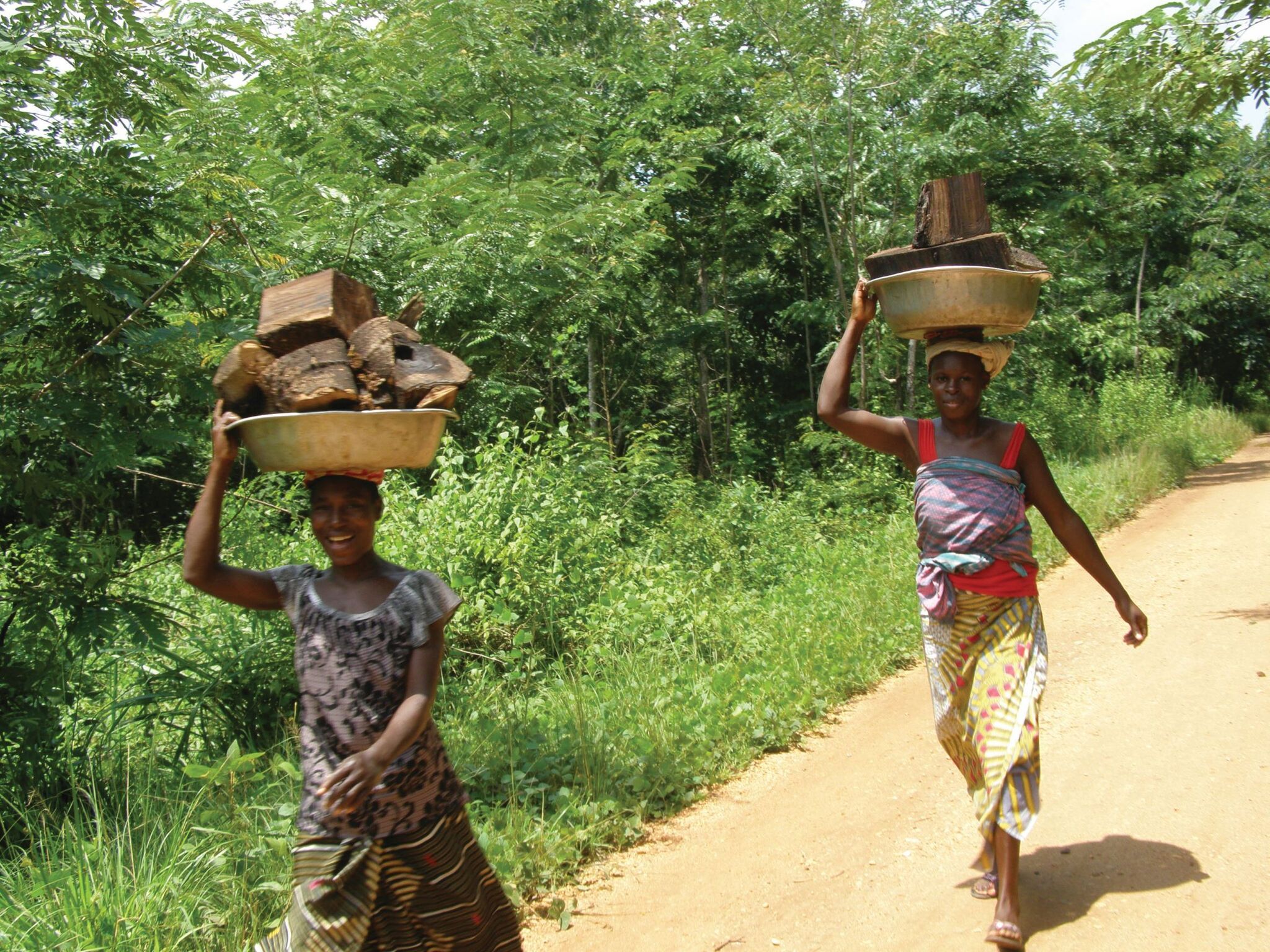 Rural women in Côte d’Ivoire have improved their standard of living, with support from an ITTO project, by producing charcoal with ecofriendly techniques. The venture has attracted further support from the World Bank’s Forest Investment Program. Photo: MALEBI

Friday 3 December 2021: The relatively small-budget projects funded by ITTO can help catalyze funding from other organizations, thereby offering countries an avenue for scaling up impacts, the International Tropical Timber Council heard on day 4 of its 57th session, which is being convened virtually this week.

A paper presented by the ITTO Secretariat’s Ms Sheam Satkuru on cooperation and coordination with other organizations examined this catalytic effect and provided four examples from around the tropics.

A project with an ITTO contribution of about USD $437 000 has helped strengthen capacity for sustainable forestry in tropical dry forests in northern Peru. Among other things, the project, which is being implemented by the Partnership for Integrated Research and Development (AIDER), enabled local professionals to formulate a larger project proposal that was submitted to the Global Environment Facility (GEF). This larger project has obtained funding of USD 7.6 million from the GEF and co-financing from the Government of Peru of USD 53.5 million.

The same ITTO project also helped establish a strategic alliance between AIDER and the nature-based-solutions division of a French energy company. This alliance, in turn, has led to the development of a long-term project to promote REDD+ in a biosphere reserve in northwestern Peru and to establish planted forests using native species. This project, which is expected to start in 2022 and will also involve Peru’s National Forest and Wildlife Service (SERFOR) and a local community organization, is expected to be funded to the amount of USD 50 million over 20 years.

Another project, in Côte d Ivoire, with an ITTO contribution of about USD 150 000, helped MALEBI, a women’s association, to restore degraded land in the Ahua Forest Reserve and put their charcoal business on a sustainable footing. The success of the project enabled the women’s group to attract funding through the World Bank’s Forest Investment Program for an expanded project with a budget of about USD 400 000, under which the group is expanding its forest landscape restoration work.

In Papua New Guinea, a project with an ITTO contribution of USD 739 000 helped improve forest governance and develop a first draft of the country’s timber legality standard (TLS). After project completion, the Australian Government, the European Union and the Food and Agriculture Organization of the United Nations provided substantial additional financial assistance to continue the development of the TLS, which is now poised to enter into force.

In the Amazon, an ITTO project implemented by the Amazon Cooperation Treaty Organization (ACTO) with an ITTO budget of USD 1.12 million benefited eight countries in the region—Bolivia, Brazil, Colombia, Ecuador, Guyana, Peru, Suriname and Venezuela. In 2013, Brazil’s National Bank for Economic and Social Development approved an amount of USD 12 million to ACTO for a follow-up five-year project to expand the work initiated under the ITTO project and making use of the infrastructure it established.

Speaking after Ms Satkuru’s presentation, Ms Yoshiko Motoyama, from Japan, said that such examples are extremely valuable, with many large global funds now focusing more on scaling up pilot projects implemented through other bodies as a way of limiting risk.

Mr Dambis Kaip, from Papua New Guinea, said that, in addition to the example given by the Secretariat, other projects in his country are attracting interest from partners, who want to be part of the success.

“ITTO projects are important as frontrunners for future support by other donors,” he said.

Other matters on day 4

Also on day 4, Dr Johnson presented on ITTO’s new financial architecture, which is now being implemented in a pilot phase. He reported that the first call for concept notes under this pilot phase had opened in December 2020 and closed in April 2021. It had yielded a total of 12 concept notes that met the criteria established by Council, and these had been published on the ITTO website. To date, one concept note (to promote sustainable domestic wood-product consumption in Viet Nam) had been developed into a project proposal that has been funded by the Government of Japan and is now under implementation. The USA indicated that it is working with the Government of Indonesia to develop a second concept note into a project.

The Chairperson’s Open-ended Drafting Group convened late in the day to work on draft decisions related to, among other things, the adoption of the Strategic Action Plan for 2022–2026.

The Council also further considered the agenda item on the selection of the Executive Director.

The International Tropical Timber Council meets once a year to discuss a wide-ranging agenda aimed at promoting sustainable tropical forest management and the trade of sustainably produced tropical timber.

Daily coverage of the session by IISD reporting services is available at  https://enb.iisd.org/ITTC57-International-Tropical-Timber-Council 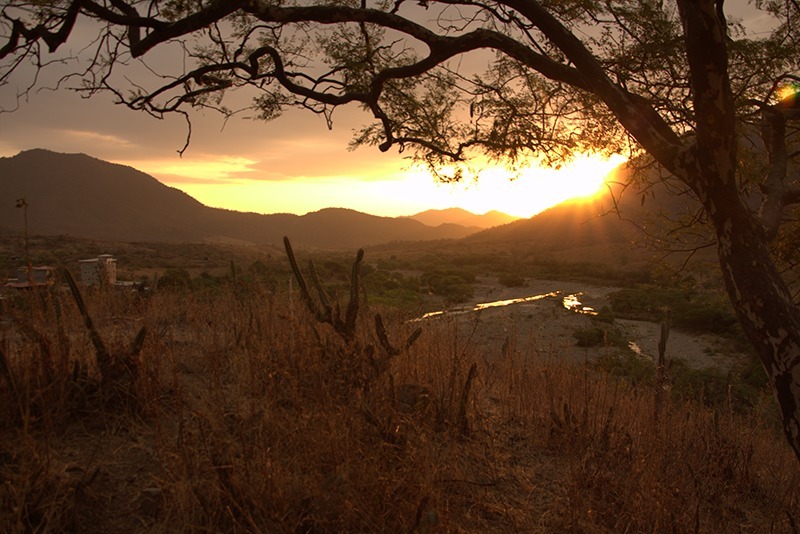 A typical scene of dry forest in northwestern Peru. An ITTO project has catalysed further financing to sustainably manage this valuable ecosystem while increasing the wellbeing of the communities that depend on it. Photo: María Juárez 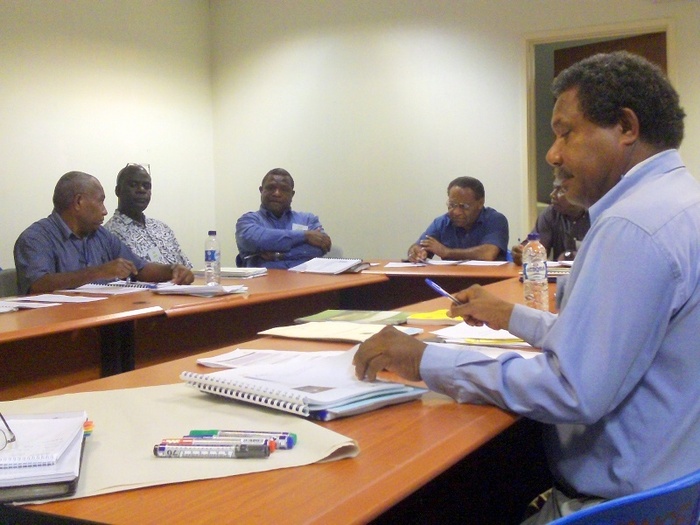 One of the workshops to develop a first draft of Papua New Guinea’s timber legality standard (TLS) as part of an ITTO-funded project. After completion of the initial project, the country received assistance from other funding agencies to advance the TLS, which is now poised to enter into force. Photo: Tom Bukon 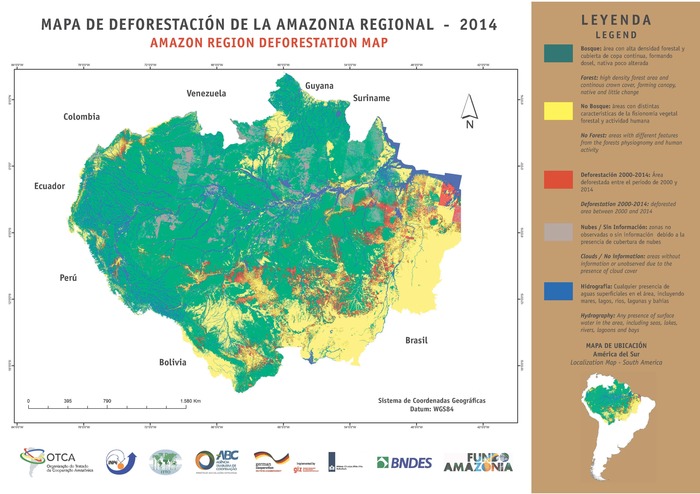 A regional map of deforestation in the Amazon produced under the “Panamazon” ITTO project. The achievements of the project are being scaled up with funding from Brazil’s National Bank for Economic and Social Development. Image: Amazon Cooperation Treaty Organization 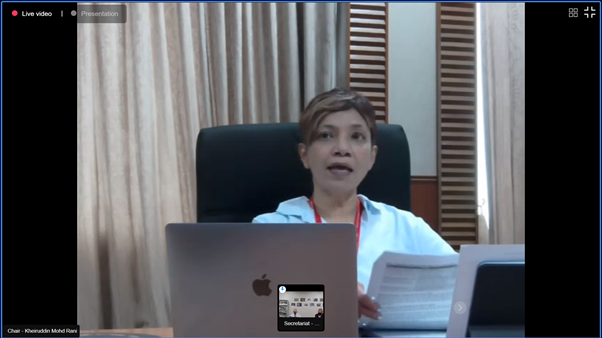 The ITTO Secretariat’s Sheam Satkuru presents on cooperation and coordination with other organizations on day 4 of the 57th session of the International Tropical Timber Council. 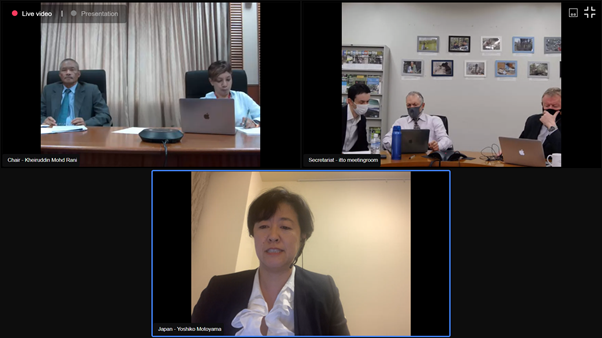 Japan’s Yoshiko Motoyama (centre) discusses the catalytic value of ITTO projects and the potential for scaling up on day 4 of the 57th session of the International Tropical Timber Council. Council Chair Kheiruddin Mohd Rani (on the left in the left-hand panel) and Secretariat officers listen in. 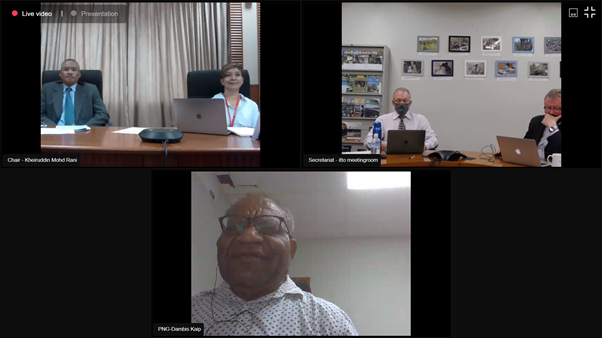 Speaking on day 4 of the 57th session of the International Tropical Timber Council, Papua New Guinea’s Dambis Kaip (centre) said that ITTO projects are frontrunners for future support by other donors. Council Chair Kheiruddin Mohd Rani (on the left in the left-hand panel) and Secretariat officers listen in.

The USA’s Aysha Ghadiali makes an intervention on day 4 of the 57th session of the International Tropical Timber Council. 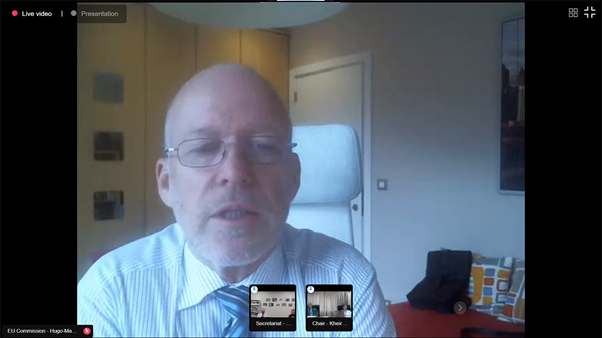 The EU’s Hugo-Maria Schally makes an intervention on day 4 of the 57th session of the International Tropical Timber Council. 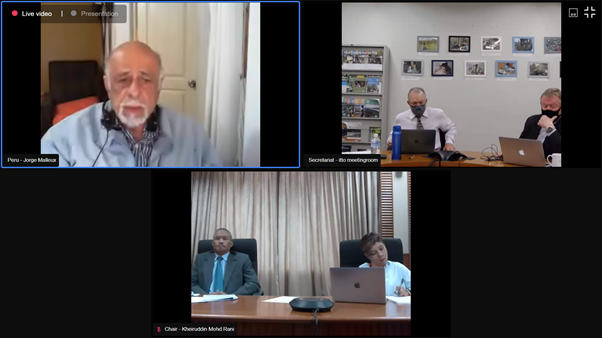 Producer spokesperson Jorge Malleux (top left) makes an intervention on day 4 of the 57th session of the International Tropical Timber Council. Council Chair Kheiruddin Mohd Rani (on the left in the bottom panel) and Secretariat officers listen in. 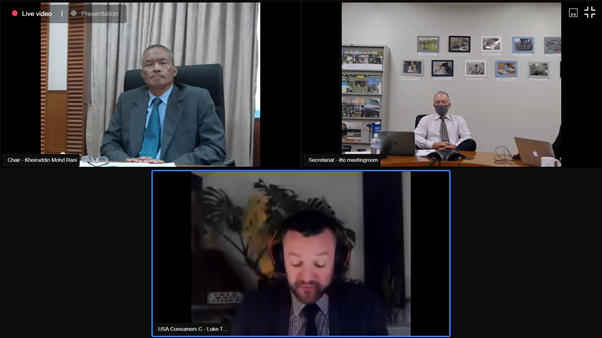 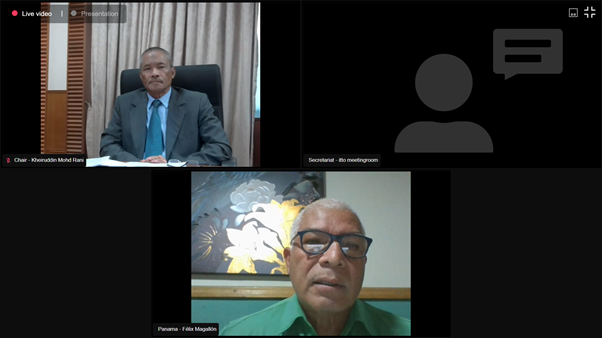 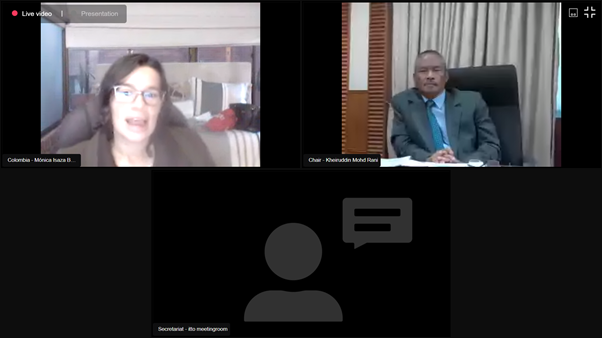 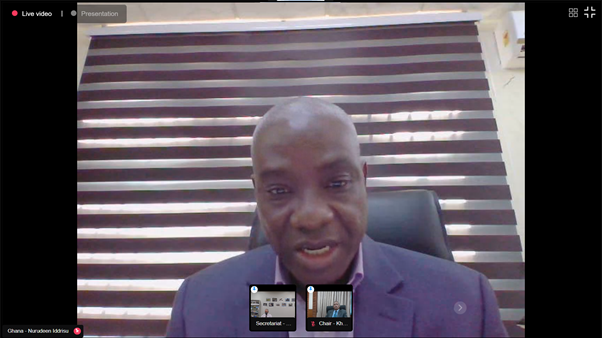 Ghana’s Mohammed Nurudeen Iddrisu makes an intervention on day 4 of the 57th session of the International Tropical Timber Council. 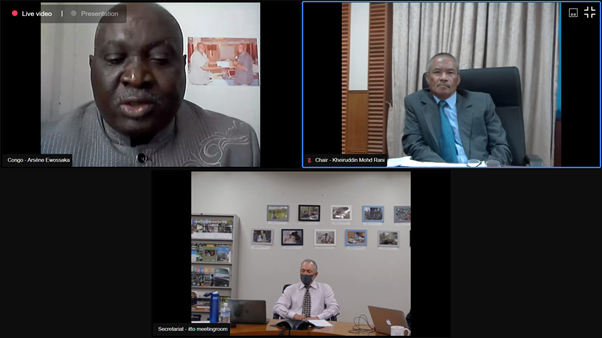 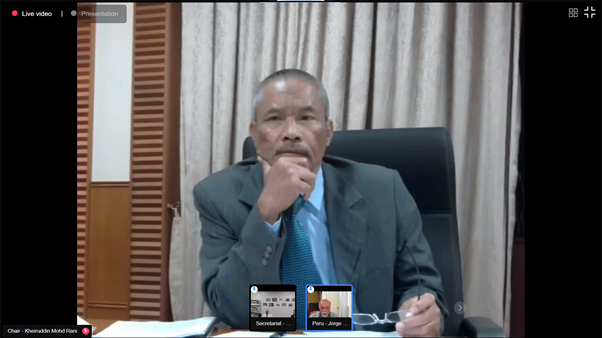 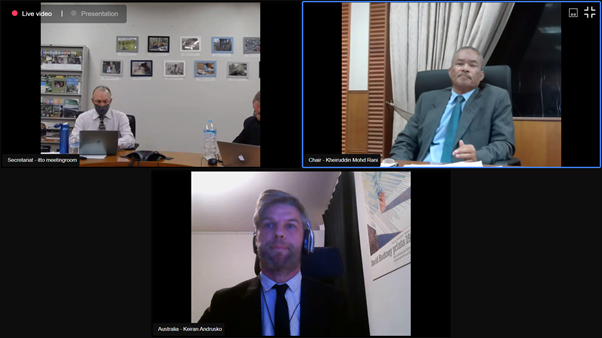 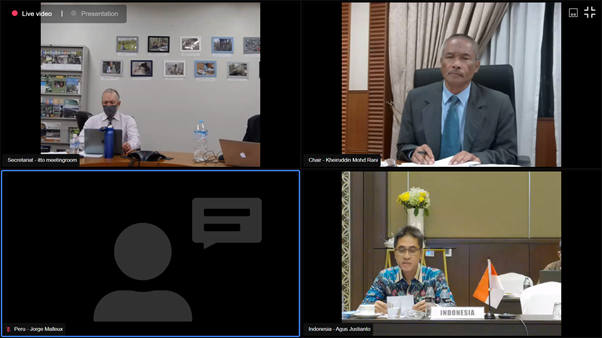