ITTO’s internal governance now meets or exceeds international governance standards and the Organization is poised to resume its leadership role in the global forest community, according to the Chairperson of the International Tropical Timber Council, Mr Zhang Zhongtian.

Mr Zhang, who was speaking today at the opening of the Council’s 54th session in Yokohama, Japan, said that the recently published Special Report of the Intergovernmental Panel on Climate Change had sent a clear signal about the crucial importance of productive forests, sustainably produced forest products and a circular economy in averting disastrous climate change.

“Since its very beginning, ITTO has, through policies and field projects, promoted sustainable forest management, sustainable timber production and sustainable trade in forest products,” said Mr Zhang. “We are a long-time leader, therefore, in efforts to develop a more circular, sustainable economy. With its now best-practice governance, ITTO is fully primed to assume a lead role in this renewed global push for sustainable supply chains.”

Mr Koji Hongo, Deputy Director General of the Japan Forestry Agency, who also spoke on the opening morning of the session, said the Government of Japan appreciated the steps ITTO had taken to strengthen its financial rules and was now making efforts to resume voluntary financial contributions to the Organization.

In his address to the Council, ITTO Executive Director Dr Gerhard Dieterle said the world must focus urgently on the role of productive forests in mitigating climate change. To make the most of the opportunity, tropical countries needed to create sustainable supply chains that demonstrated to consumers that timber has been harvested and traded legally and sustainably.

For ITTO, said Dr Dieterle, “I believe it is now time for a more holistic approach that places much more emphasis on integrated supply chains and markets, as per our mandate under the International Tropical Timber Agreement”.

Also at the opening of the Council session, Côte d’Ivoire’s Minister of Water and Forests, Mr Alain-Richard Donwahl, spoke about his country’s plan to increase the forest area from 11% of the total land area today to 20% by 2030. In implementing this plan, he said, the main priorities were improving forest governance, strengthening the conservation of existing forests, and restoring degraded forestlands.

Mr Donwahl also spoke about an ITTO project to promote community forestry, which, he said, had helped strengthen community cohesion in the wake of violence associated with a period of socio-political crisis. The project had been so successful that the government was now hoping to scale it up to other communities in a second phase involving ITTO, the Japan International Cooperation Agency and other international organizations.

Mr Felix Ngoma, Ambassador of the Congo to Japan, presented a speech on behalf of Minister of Forest Economy Rosalie Matondo, who was unable to attend the session. Mme Matondo has recently been appointed ambassador for the Brazzaville Roadmap on Community Forestry with the mission to oversee progress in implementing the roadmap in all Central African Forestry Commission countries.

In managing the Congo’s production forests, it is crucial to “take into account the needs of local communities so they can share the profits from timber activities and women are not left behind,” according to Mme Matondo.

Mr Benito Owusu-Bio, Deputy Minister of Lands and Natural Resources in Ghana, spoke about the shift in his country’s forest policy towards payments for ecosystem services, ecotourism development, plantation development, and the potential of forests to mitigate climate change.

Mr Katsunori Watanabe, Deputy Mayor of the City of Yokohama, Japan, spoke about the city’s water-catchment forests, which the governments of Yokohama and Doshi had been co-managing for more than 100 years. Council participants will visit these forests on a field trip on Friday.

Mr Hiroto Mitsugi, Assistant Director General of the Food and Agriculture Organization of the United Nations, said FAO and ITTO would continue working closely together as part of the Collaborative Partnership on Forests, including to ensure that sustainable timber value chains work for the achievement of the Sustainable Development Goals and climate-change mitigation.

Also today, the Council discussed, among other things, the impairment of ITTO funds, improving ITTO’s financing infrastructure and fundraising strategies, and rotation in the framework of the selection of the Executive Director. 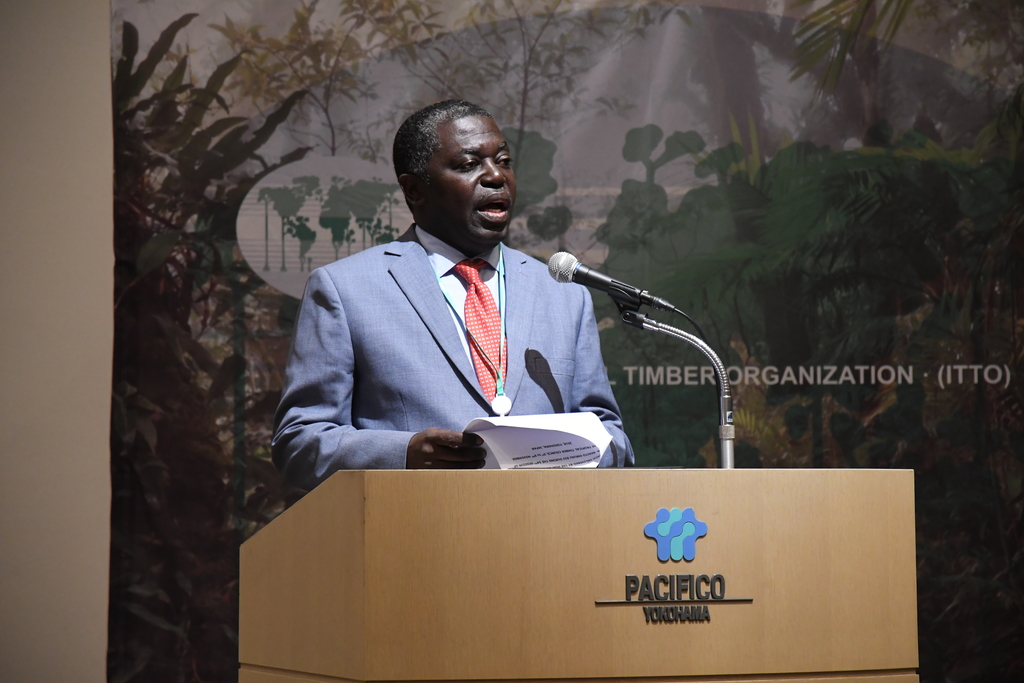 Mr Benito Owusu-Bio, Deputy Minister of Lands and Natural Resources in Ghana, spoke about the shift in his country’s forest policy towards, among other things, payments for ecosystem services. Photo: K. Sato/ITTO 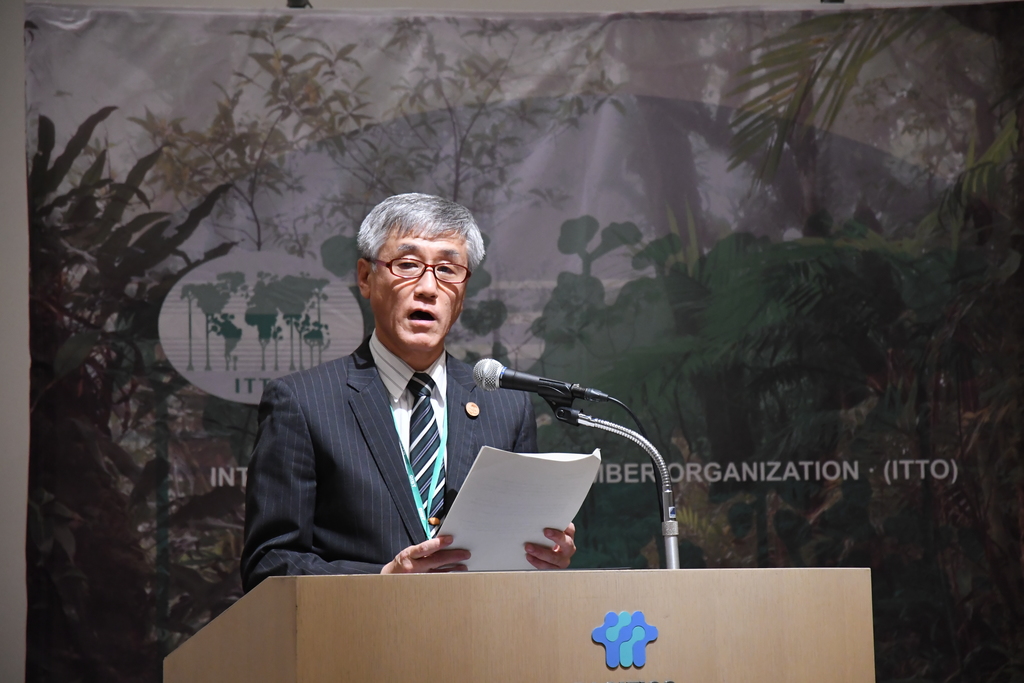 Mr Koji Hongo, Deputy Director General of the Japan Forestry Agency said the Government of Japan appreciated the steps ITTO had taken to strengthen its financial rules and was now making efforts to resume voluntary financial contributions to the Organization. Photo: K. Sato/ITTO 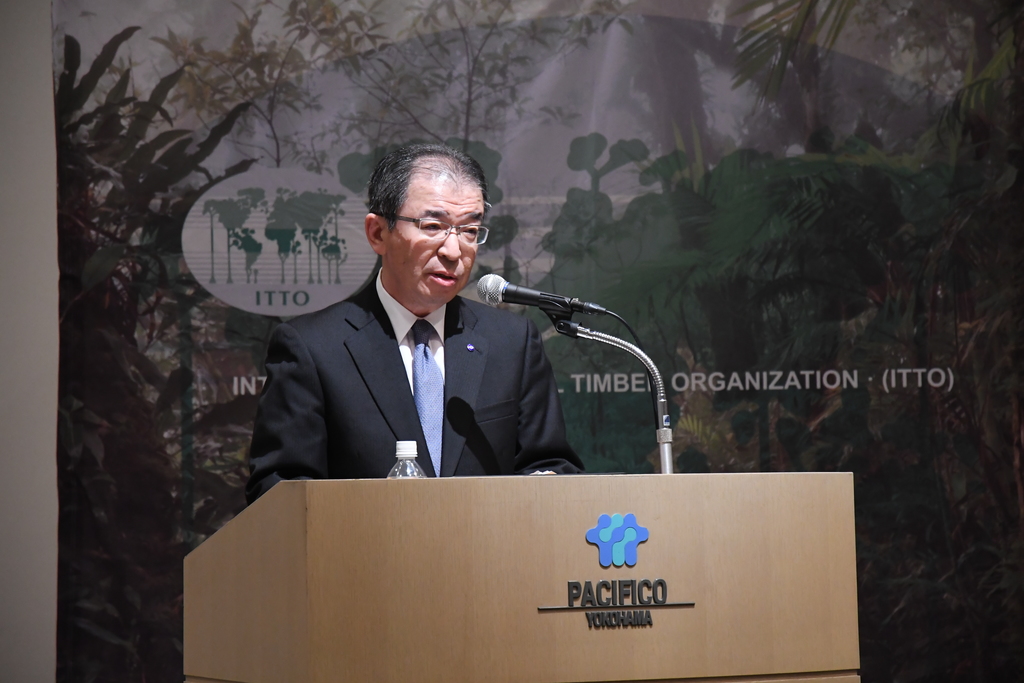 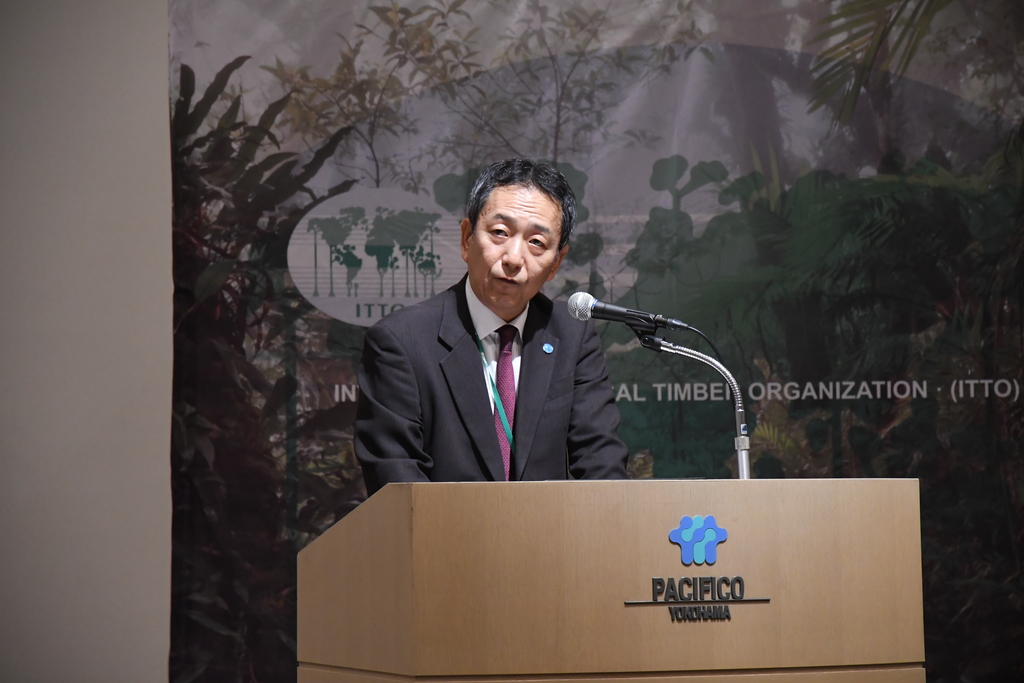 Mr Hiroto Mitsugi, Assistant Director General of the Food and Agriculture Organization of the United Nations, said FAO and ITTO would continue working closely together as part of the Collaborative Partnership on Forests. Photo: K. Sato/ITTO

Delegates chat during a coffee break outside the plenary hall on the opening day of the 54th Session of the International Tropical Timber Council. Photo: K. Sato/ITTO